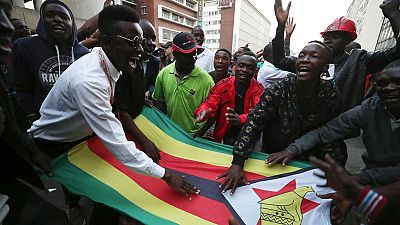 The United States on Thursday placed on its sanctions list a former Zimbabwean army general who commanded troops accused of killing six civilians a year ago after a disputed election.

The listing of Anselem Sanyatwe, the first over the crackdown, signals U.S. frustration over the lack of accountability in the Aug. 1, 2018 killings in the capital, Harare.

The announcement brought fresh anger from a Zimbabwe administration that since the fall of longtime leader Robert Mugabe in late 2017 has pressed to lift U.S. sanctions over past rights abuses.

“It is our position that sanctions imposed on our country are illegal,” said government spokesman Nick Mangwana. He said President Emmerson Mnangagwa has adopted a policy of rapprochement with the West “but that policy is not a policy of appeasement.”

Sanyatwe is the first Zimbabwean official listed for U.S. sanctions since Mugabe stepped down under military pressure. The former general and his wife are now barred from traveling to the U.S.

Soldiers last year were deployed to suppress a protest against delays in announcing results of Zimbabwe’s first election without Mugabe on the ballot. The U.S. statement said it has “credible information” that Sanyatwe was involved.

The election had been peaceful, giving many people hope that the southern African nation was on the brink of change.

Mnangagwa, who took over after Mugabe and was declared the election winner, had promised sweeping post-Mugabe reforms and re-engagement with the West.

Sanyatwe later defended the soldiers’ deployment while appearing before a commission of inquiry into the killings, but denied the army shot the protesters and instead accused the opposition.

He later retired from the army and was appointed ambassador to Tanzania.

Mangwana, the government spokesman, said Zimbabwe’s president had shown “transparency” by appointing the commission of inquiry. Its report found that soldiers and police used “unjustified and disproportionate” force in the killings.

Zimbabwe’s military has been sent into the streets since then. The U.S. sanctions statement noted that “there has been no accountability for the excessive use of force by Zimbabwean security forces on civilians in January and February this year, which reportedly resulted in at least 13 deaths, 600 victims of violence, torture or rape, and more than 1,000 arrests.”

That crackdown came after protests in Harare over the country’s collapsing economy, with rapid inflation and shortages of medicines and other necessities.

The U.S. and the European Union, which imposed sanctions almost two decades ago over alleged rights abuses, have in recent months issued several statements warning against continued violations.

Mnangagwa’s government has made the lifting of sanctions a top priority and has held several meetings with senior officials from the U.S. and EU to lobby for that and Zimbabwe’s readmission to the Commonwealth.

The killings “demonstrated to the whole world the crisis of governance that has defined the character and the nature of the problem in Zimbabwe,” opposition leader Nelson Chamisa, who placed second in last year’s election and lost a court challenge to the results, told a prayer meeting on Thursday to remember the killings. “After the departure of Mr. Mugabe, nothing has changed. The old cannot renew.”