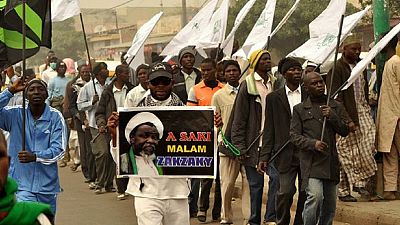 A Nigerian court has granted the government permission to label a local Shi’ite Muslim group a terrorist organisation, the solicitor general told Reuters on Saturday.

Members of the Islamic Movement of Nigeria (IMN) have been marching in the capital Abuja calling for the release of their leader, Ibrahim Zakzaky, who has been in detention since 2015 despite a court order to release him.

The protests have often turned violent. An IMN spokesman said at least 20 of the group’s members were killed this week during demonstrations.

Dayo Apata, Nigeria’s solicitor general, confirmed in a mobile text message that a federal court in Abuja had granted the government permission to proscribe the IMN, a move offering the authorities the chance to clamp down harder on the group.

An IMN spokesman said they had not received any formal notice but said marches would continue.

Zakzaky’s office said plans to ban the movement had been considered since 2015 and it was not surprised by the move.

A court in northern state of Kaduna is set to decide on Zakzaky’s bail application on Monday.

The Shi’ite group can appeal the order.