Inside fight to contain Ebola in DRC: money, vaccines and violence 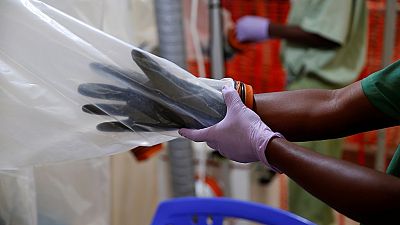 Authorities including the health ministry in the Democratic Republic of Congo (DRC) and international agencies are working around the clock to contain an ongoing Ebola outbreak.

In Uganda, oil producer China National Offshore Oil Corp (CNOOC) this week halted field work at a project in the western part of the country over an Ebola scare, while DRC’s president last week instituted a new response team that triggered the resignation of the country’s health minister.

Meanwhile, the World Bank and the International Monetary Fund (IMF) have pledged more financial assistance, as debate rages on the deployment of a second vaccine in the DRC.

Uganda’s oilfields in the Albertine rift basin are a few miles from the epicentre of the latest Ebola outbreak that has killed nearly 1,700 people in the Democratic Republic of Congo since August last year.

“No activities for CNOOC in the area,” CNOOC spokeswoman Aminah Bukenya told Reuters.

“Those in the camp are supposed to keep there until…the ministry of health deems it fit for operations to continue.”

The decision was prompted by the death of a patient suspected of Ebola at a health centre in the area a few days ago, Bukenya said.

The health ministry determined the death was not caused by Ebola, but the company has decided not to resume work “for some time” for precautionary purposes, she said.

The Ebola fears were partly fanned by Congolese refugees moving in the areas around the oil fields and at risk of spreading the disease, she said.

In June two people who had travelled from Congo died of Ebola in Uganda, without spreading the disease further there, while a third who had also visited Uganda from Congo died shortly after returning home.

The deaths put Uganda on a high alert for a potential major cross-border spillover of the Ebola outbreak.

This month, a case was detected in Goma, a city of 2 million on the border with Rwanda, heightening fears about the spread of the haemorrhagic fever.

Health officials in DRC and international agencies have struggled to harmonise their position on the deployment of a second experimental vaccine against Ebola.

Ilunga said the J&J vaccine had not been proven effective and could confuse people in eastern Democratic Republic of Congo, where wild rumours are hampering the response. In his resignation letter, he said advocates had shown a “lack of ethics by … hiding important information from medical authorities”, but gave no details.

Such scepticism can resonate strongly on a continent where some pharmaceutical trials have faced accusations in the past of failing to obtain informed consent and providing subpar care to participants.

Local campaigners say people are scared and confused about the various medicines being used. In addition to the vaccine, four experimental treatments are being given to Ebola patients.

All are still unlicensed, which means they can only be used in clinical trials overseen by Congo’s health ministry.

“It is not ethical to test vaccines on people,” said Matina Mwanack, the administrator of an advocacy group in the eastern Congo city of Butembo called Families United Against Ebola.

“(We) have suffered a lot from the lack of needed information about the vaccines and treatments being tested.”

Omar Kavota, who heads a group of religious and political leaders in eastern Congo, said “introducing a second vaccine would amplify rumours”, including over why some patients got one while others received the second.

In support of more vaccination

Proponents of a second vaccine including medical charity Medecins Sans Frontieres (Doctors Without Borders) and the Wellcome Trust, argue it can only be tested in a live outbreak, since it would be unethical to deliberately infect trial volunteers.

They propose deploying it where the disease has not yet spread, while the Merck vaccine continues to be used to protect contacts of suspected cases.

“Both vaccines should work hand in hand,” said Peter Piot, director of the London School of Hygiene and Tropical Medicine and one of the scientists who first discovered the Ebola virus.

Since the West African outbreak, J&J has tested its vaccine on more than 6,000 volunteers in a dozen trials, confirming its safety and ability to generate an immune response.

Josie Golding, head of epidemics at the Wellcome Trust, said “we could run out of Merck vaccines” if the outbreak extends into a second year. WHO has already begun using smaller doses to ration supplies.

Congo’s health ministry disputes there is a shortage of the Merck vaccine. The company said it expects to produce about 900,000 doses over the next six to 18 months, in addition to 440,000 doses that have already been donated or are available.

The World Bank on Wednesday announced it was deploying another $300 million in crisis aid for DRC to help contain the Ebola outbreak.

The grants and credits follow WHO’s declaration of the current outbreak a Public Health Emergency of International Concern, the World Bank said in a statement.

The funds will be added to the $100 million the bank provided after Ebola appeared in August 2018.

“Together, we must take urgent action to stop the deadly Ebola epidemic that is destroying lives and livelihoods in the Democratic Republic of Congo,” World Bank Chief Executive Officer Kristalina Georgieva said in a statement.

“The communities and health workers on the front line of this outbreak urgently need more support and resources from the international community to prevent this crisis from worsening inside the country and from spreading across borders.”

Meanwhile, the IMF also confirmed on Wednesday that it it had ample scope to provide financial support to DRC if it needs help dealing with the Ebola outbreak.

“Although the economic impact is not yet clear, we have ample scope within the Fund’s lending facilities to provide financial support, if needed, and we stand ready to take action,” spokesman Gerry Rice told reporters.

He added that IMF officials are in contact with authorities in Congo and continue to monitor and assess the situation closely.

Efforts to contain the Ebola outbreak have been undermined by mistrust of health workers and violence by armed militias. Treatment centres have been attacked.

On Monday this week, Islamist rebels killed twelve people in two attacks in Beni, the epicentre of the Ebola epidemic.

“Despite a strong deployment of Congolese army troops in the region, the population is in a state of total panic because of these attacks,” Donat said.

The presence of an Islamist militant group, along with a patchwork of other violent militias and armed criminal bands, has severely hampered efforts to contain the world’s second-worst Ebola epidemic on record.