Nigerian soldier who returned missing $41,500 to be rewarded 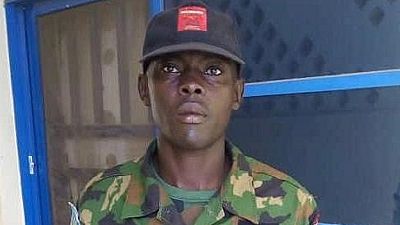 A member of the Nigerian Air Force, NAF, is to be rewarded by the force for exhibiting integrity with the return of lost money of over $41,000.

Bashir Umar, an Aircraftman, ACM, found and returned the sum of 37,000 euros, which money has since been “united” with its owner who lost it in the ancient city of Kano, in northern Nigeria.

“The incident occured at the Hajj Camp Market in Kano on Tuesday 16 July 2019, when ACM Bashir, who is a member of the NAF Mobile Air Defence Team (MADT) deployed for airport security duties…

“… while on routine patrol with some of his colleagues, found the money in a parcel. Fortunately, there was a phone number on the parcel which the Airman called, and eventually handed over the package to the owner,” the NAF said in a statement.

NAF’s head subsequently ordered that processes be undertaken: “to immediately come up with modalities to reward the airman so as to encourage other personnel of the Service to continue to embody attitudes and behaviours that reflect NAF’s core values of Integrity, Excellence and Service Delivery.”

The statement was signed by head of NAF public relations, Ibikunle Daramola and posted on their social media handles with an attached photo of Bashir Umar. The posts have been widely lauded by users of Facebook and Twitter.

In August 2018, two private security guards at Nigeria’s Muratala Muhammed International Airport were awarded for their honesty in the line of duty.

The two, junior security guard Achi Daniel and his supervisor Francis Emepueaku, according to the federal airports authority, returned a forgotten bag with large sums of money and expensive items. The two worked at the multi-level car park at the Lagos airport.

“Nigeria will no longer be a byword for corruption and plundering of public resources. That is the path we have chosen to take, and our country will eventually get to a new shore,” Buhari added.