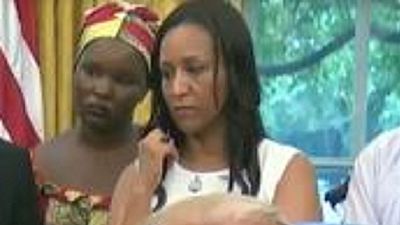 As part of his meetings with survivors of religious persecution from across the world, U.S. president Donald Trump, met with a number of people at the White House on July 17.

Among the group were two Africans – an Eritrean and a Nigerian with both victims sharing briefly their excitement to be at the White House.

Eritrean gospel singer Helen Berhane who currently lives in Asylum in Denmark shared how she lived months in detention in a metal container back in Eritrea.

She pleaded with the U.S. administration to also help rescue other victims of government persecution which continues in the country till date. The recent case was a rift with the Catholic Church that led to closing of over 30 health facilities.

MS. BERHANE: My name is Helen. I’m from Eritrea. I’m a gospel singer. So I have been, for 32 months, in a metal shipping container because of my faith.

“But the reason I am here — all our pastors, they are still in prison in Eritrea, including the patron (inaudible). So that is my message. I am a voice for those voiceless.

THE PRESIDENT: Thank you very much. Appreciate it.
MS. BERHANE: Thank you. We pray for you.

Ms. Berhane was only released in 2006 after she felt critically ill. In a 2018 interview with the BBC, she confirmed that the government had asked her to stop singing which she said she could not do.

“So I am singing more because of the situation I passed through and what I’m doing now. For me to sing is like before you go to war. So song is the key. So they know when you sing you have the power,” she told the BBC.

Nigeria’s Esther Bitrus on her part had a more brief interaction which entailed thanking Trump for the opportunity to meet him and reiterating how hard it was to have been abducted by Boko Haram.

It is the second time Trump has met Boko Haram survivors. In 2017, he met with two girls who were among those that escaped from the infamous Chibok Girls raid in 2014.

MS. BITRUS: Thank you, Mr. President —
THE PRESIDENT: Thank you very much. Thank you.

MS. BITRUS: — for the opportunity to see you. I am Esther, from Nigeria. I do three years in (inaudible). I escaped from Boko Haram. So thank you for ….
THE PRESIDENT: It’s tough stuff, right?

MS. BITRUS: Yes.
THE PRESIDENT: That’s a tough one. Thank you.

Other persons who were at the White House included Nobel Laureate Nadia Murad of Syria. She was awarded the Nobel Peace Prize of 2018 along with DR Congo’s Dr. Denis Mukwege.

Others were from North Korea, Cuba, China, Bangladesh, New Zealand and Myanmar.

“With us today are men and women of many different religious traditions from many different countries. But what you have in common is each of you has suffered tremendously for your faith.

“You’ve endured harassment, threats, attacks, trials, imprisonment, and torture. I got to know many of you and helped you get some — get some of you out of the difficult situation that you were in.

“I’m very proud of you in the way you’ve reacted to a different life. It is a tremendous thing,” a White House transcript of Trump’s remarks read.