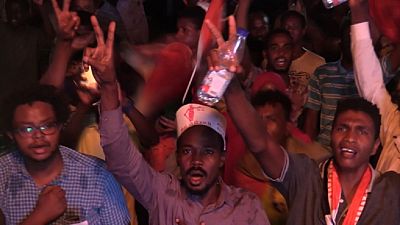 Thousands of Sudanese gathered in Khartoum on Thursday to pay tribute to the dozens of protesters killed in the crackdown on Sudan’s seven-month protest movement that prompted President Omar al-Bashir to leave.

The rallies took place the day after the signing of a power-sharing agreement between the military council that succeeded Bashir and the leaders of the protest, the first step towards a civilian government, the main demand of the protesters.

Talks are expected to resume on Friday to finalize points on which both sides remain in disagreement.

One of the main leaders of the protest movement, Ahmed al-Rabie, however, told AFP late Thursday that the protesters were thinking of demanding a postponement of negotiations with the Military Council scheduled for Friday.

“This possibility is being studied so that there can be more discussion within the protest movement,” he said.

Coming from several parts of Khartoum and waving Sudan flags , men, women and children gathered in one of the largest parks in the Sudanese capital, chanting “Civil Regime, Civil Regime!” and “Freedom, peace, justice!”, according to witnesses.

Many of the protesters who arrived near Green Yard Park were in tears and shouting slogans in memory of the killed protesters.

“We are here to maintain our demands since the Military Council does not respond,” said Shaima Ahmed, a protester. “We will not give up.”

Protesters left the park in the evening, an AFP journalist said, and members of the paramilitary forces deployed around.

The Association of Sudanese Professionals (SPA), one of the main protest movements, called for the rally in “tribute to the honorable martyrs of the December Revolution”.

Accentuating the pressure
The protest movement was triggered on December 19 by the tripling of the price of bread in a poor country with a bloodless economy. The demonstrations quickly turned into a protest against the power of General Bashir, who led the country with an iron fist for nearly three decades before his dismissal and arrest by the army on April 11.

Epicenter of the protest, a sit-in of thousands of protesters installed since April 6 before the army headquarters in Khartoum to demand a civilian power, was brutally dispersed on June 3.

The crackdown has left 246 dead since December 19, including 127 for the only day of June 3, said a committee of doctors close to the challenge at a press conference Thursday night.

In addition, 1,353 people have been injured since the start of the dispute, according to this source.

The authorities spoke of 71 dead.

According to the agreement signed Wednesday after difficult negotiations, a Sovereign Council of five military and six civilians will be responsible for leading the transition for a little over three years. The military will preside over this body for the first 21 months, and civilians will take over for the remaining 18 months.

For Ammar Zubeir, a protester in Khartoum, the protests are intended to accentuate the “pressure before the meeting” on Friday.

Among the outstanding issues is the “absolute immunity” demanded by the ruling generals in connection with the suppression of rallies, an unacceptable demand for the representatives of the protest.

“Too many concessions”
There is also the question of the creation of a transitional parliament and the withdrawal of militia still present in Khartoum and other cities.

The Alliance for Freedom and Change (ALC), the spearhead of the protest, “has already made too many concessions,” said Safaa Moudawi, a protester. “We ask them not to do more”.

In a joint statement, the United States, the United Kingdom and Norway called on the parties to “quickly conclude the constitutional agreement” and “form a civilian-led transitional government, which the Sudanese people peacefully call for and with courage since December 2018 “.

The future civilian government “will work to realize the aspirations of the Sudanese people for peace, justice and development,” they said.