One in four Ebola cases undetected in DRCongo: WHO 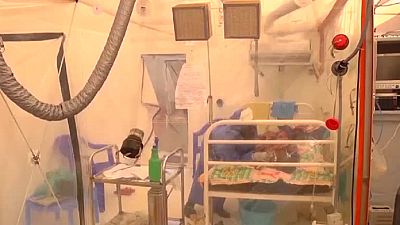 Roughly a quarter of Ebola infections in eastern Congo are estimated to be going undetected or found too late, a World Health Organization (WHO) expert said on Thursday.

But the WHO, in a weekly update issued subsequently, said there were “early signs” of an easing of the intensity with which the virus is spreading following weeks of insecurity that curbed access to communities and interrupted vaccination.

Some 2,025 cases and 1,357 deaths have been recorded since the epidemic began in August in the Democratic Republic of Congo’s North Kivu and Ituri provinces, said Dr. Mike Ryan, executive director of WHO’s Health Emergencies Programme.

We believe at this point, and let me be very cautious here, we believe that we are probably detecting in excess of 75 percent of cases, we may be missing up to a quarter of cases.

It is the second-worst outbreak of the virus on record.

Some 88 infections have been detected each of the last two weeks, down from a peak of 126 weekly in April, and WHO teams are checking 15,000 suspected contacts each day for symptoms, he added.

“We believe, let me be very cautious here, we believe we are probably detecting in excess of 75% of cases – we may be missing up to a quarter of cases,” Ryan told a news briefing in Geneva.

“We must get earlier detection of cases, have more exhaustive identification of contacts,” he said.

About 90% of people potentially exposed to the virus have agreed to be vaccinated, which has proved efficient, he said. “It’s not them that matter now, it’s the 10% that don’t, because all of our cases are coming from that group.”

More than 130,000 people have been vaccinated to date, Congolese figures show.

The epidemic is “not out of control, but it is certainly not under control,” he said.

It was spreading fast in the rural area of Mabalako and at a lesser rate in the city of Butembo.

A third of identified cases are people who died without having being admitted to Ebola treatment centers, the WHO update said.

Ryan said risks to aid workers had decreased of late but noted a deadly attack on civilians earlier this week.

A local official said 13 civilians were killed late on Monday in an attack by the Allied Democratic Forces – a group thought to be linked to Islamic State.

Greater political engagement is needed to combat the Ebola outbreak, Ryan said. “We need the government to reach out to the opposition, we need an ‘all party’ approach … we need a single voice of leaders in Congo about this outbreak.”