At least 5 dead, dozens missing after landslides in Eastern Uganda 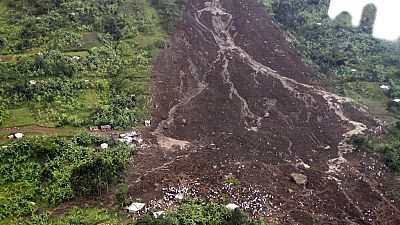 The Red Cross in Uganda says dozens are missing, and local media are reporting that at least three people have been killed, following landslides in the disaster prone Eastern district of Bududa.

Daily Monitor reported that the rains that started at about 7pm on Tuesday night resulted into landslides at about 11:30pm. Several villages in Buwali and Bukalasi sub-countries were affected.

“I heard noise from the hill and I ran out of the house to find out what was happening. Within seconds, the rolling mud had covered the house and I could not save my daughter,” Esther Nashuwu told Daily Monitor.

Her 8-year-old daughter, Esther Nashuwu, a pupil of Bundesi Primary School, was buried by mud.

The Prime Minister’s office confirmed the death toll of five and said an unconfirmed number of people were missing.

“There’s a team of Red Cross and OPM and local authorities on the ground in a rescue operation,” said Julius Mucunguzi, spokesman for the office of the prime minister.

People in precarious and vulnerable areas should immediately evacuate and shelter with relatives who are in more secure grounds, he added.

A history of landslides

Three serious landslides occurred in the Bududa district that borders Kenya after an onslaught of rain began on Tuesday night, the Red Cross said in a statement.

The five people confirmed dead range in age from 4 to 73 years old, and their bodies were recovered by Red Cross volunteers and local police, it said.

The area where the landslides occurred lies on the steep slopes of Mount Elgon and accessibility to the affected areas is an ongoing challenge, the Red Cross said, adding that more rains were expected.