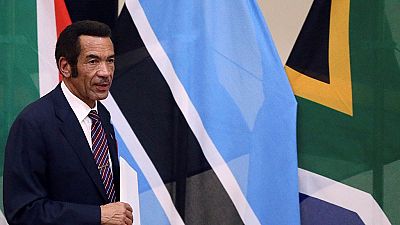 Botswanan former president Ian Khama has accused his chosen successor of becoming an autocrat and threatening the country’s reputation as a beacon of stability in Africa.

This decision was dictated by the “immature and arrogant” behaviour of the current government, the 66-year-old told AFP in a telephone interview.

Known for his outspokenness when he was in power, particularly against US President Donald Trump and Robert Mugabe, the strong man from Zimbabwe at the time, Ian Khama is now also direct towards his successor.

“The person I appointed to replace me was, as soon as he came to power, very autocratic, very intolerant, and this led to a decline in democracy,” he said.

Son of the first president of the country Seretse Khama, Ian Khama left office in April 2018 in accordance with the Constitution, which limits the reign of presidents to ten years.

He then handed over to his vice-president Mokgweetsi Masisi. But relations between the two men have since deteriorated.

The former president said he was surprised by the policies of his successor. “When he was my vice-president (…), he never showed off the problems we see now. (He has always been very intelligent, he has always supported the policies he is now unravelling,” he said.

Since taking power, Mokgweetsi Masisi has made decisions modifying several of his predecessor’s key policies, the most significant being the restoration of elephant hunting, suspended since 2014.

“For me, it is so sad and painful to see the work of all these years unravelled,” says Ian Khama.

Botswana, home to the world’s largest population of wild elephants, more than 135,000, made international headlines in May by lifting the ban on elephant hunting, provoking heated reactions.

For the government, this decision should make it possible to better control the elephant population that causes major damage in the fields.

Neither Mokgweetsi Masisi nor the BDP publicly reacted to Ian Khama’s criticism.