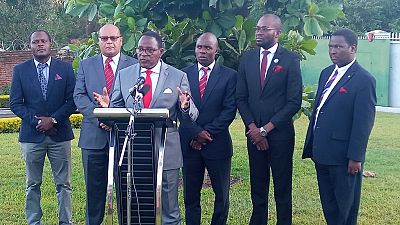 Malawi’s main opposition party is contesting the outcome of the May 21 presidential election in court, arguing that there had been serious irregularities during the counting of votes cast.

Lazarus Chakwera, the leader of Malawi Congress Party (MCP), says there must be consequences for flouting electoral guidelines.

‘‘It’s an electoral system in which officers of the electoral commission can use Tipp-Ex (correction fluid) on results sheets from all over the country… and yet there are no consequences,’‘ Chakwera said.

There is a time to unite, to unite and develop this country.

Having been sworn-in for a second term on Tuesday, Mutharika called on Malawians to unite and help develop the country.

Mutharika has dismissed doubts over the outcome, saying international observers had deemed the May 21 election “peaceful, free and fair.”

“It is the victory of the rule of law and the rule of democracy. Democracy has won,” he said.

Saulos Chilima, who was Mutharika’s deputy during his first term, polled 20.24% having quit the ruling party to contest the presidential poll. He conceded defeat on Monday and wished his former boss a fruitful second term.

The MCP had gone to court over the weekend to stop publication of results, claiming “very glaring irregularities”.

Some documents showed “the same handwriting coming from different polling stations which are miles apart,” party spokesman Eisenhower Mkaka said on Saturday, adding there was correction fluid on result sheets.

There have been no fresh reports of protests or violence after the ructions in the capital Linlongwe where supporters of Chikwera’s MCP had torn down ruling party posters and hurled rocks at government buildings.

Mutharika campaigned for a second five-year term on a record of improving roads and power infrastructure in the impoverished southeast African country.