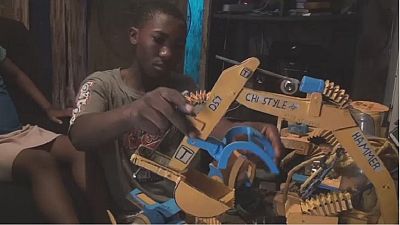 His creativity is captivating, generating amusement in his fans and passerby who enjoy watching him ‘‘cruze’‘ in his bulldozer or a miniature tank made from recycled materials.

In spite of his enthusiasm towards creating theses miniature machines, his biggest dream is to go back to school to continue his education.

“I couldn’t go to school anymore because of the crisis. To do something useful, I made things. In Bamenda, there were no activities because of the dead cities (imposed by the armed separatists, editor’s note), so I decided to move to Douala, which is more secure,” he said.

In the country’s economic capital, where he has been living with his brother-in-law for a month, the teenager recovered cardboard remains, plywood pieces, bamboo pieces and a little scrap metal.

He then carefully assembles the materials to make small machines branded “Chi Style”.

These are set in motion when the young prodigy connects them, with electrical cables, to batteries.

On a side street in Nkoulouloun, a working-class district of Douala, Awa Bless Chi sets up her works for a small demonstration. Immediately, a crowd of curious people gather around him.

Applause accompanies the demonstration. “He’s a genius,” cuts off a curious man. “You’re strong as a child! You don’t belong here in the country,” said another. “Get the plane off the ground,” says another one.

Something that fascinates his audience, with some donating money to him as a form of encouragement.

“It’s a brain, to do that at his age. But it’s not certain he’ll make it here. We need special training centres for this kind of young people,” pleads a spectator, Pierre Nguemné.

Through his work, the teenager also wants to sensitize his classmates who have remained in the English-speaking area, urging them not to forget their dreams.

Although over 600,000 children are deprived of education as a result of the crisis in Cameroon, this has done little to prevent young Awa Bless Chi from being productive and taking steps towards his dreams.