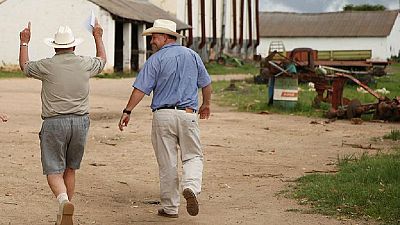 Compensation payments have been made to white farmers in Zimbabwe who lost their farms in a controversial land reform policy under the erstwhile Robert Mugabe – led government.

Finance Minister Mthuli Ncube is quoted by the state-owned Herald newspaper as saying 93 farmers had so far benefited to the tune of $64 million over the last decade.

The report added that the payments made in 2018 were for “immovable improvements” that the farmers had made on the seized lands.

Compensating the affected farmers is a noble idea and is in keeping with our constitutional dispensation.

According to him efforts were still underway to trigger more disbursements via a verification exercise given that the government had identified more farmers who needed to be duly compensated.

“Compensating the affected farmers is a noble idea and is in keeping with our constitutional dispensation,” he added.

The issue of payments long debated came up in April 2019 when the finance and agriculture ministries said they had budgeted 53 million Zimbabwean dollars ($18 million) in payments to “former farm owners affected by the land reform programme and who are in financial distress.”

Malema opined that it was particularly worrying for a financially burdened country as Zimbabwe to find money for other reasons than alleviating poverty.

“It’s a sellout position. The way he is going about it, he is not going to finish his term,” Malema said.

“That country is swimming in a pool of poverty; they can’t afford basic things like primary health, proper education and infrastructure. He gets money and goes to give it to people who are not deserving. He is reversing the gains of the revolution struggle. It’s unsustainable,” he added.

The Zimbabwe government and ruling party, Zanu-PF, have stood by the decision charging Malema to stay off their internal affairs and justifying that the move was to win investor confidence.

“Government is clearing all obstacles that have hampered cordial and co-operative relations with Britain and the whole European Union bloc. The Second Republic is focusing on re-engagement.

“The compensation of the former white farmers is necessary to instill investor confidence. We are implementing a number of reforms that ensure that we create a clear break from the past and lay a firm foundation for investment. That is the (direction) this government has taken,” he stressed.