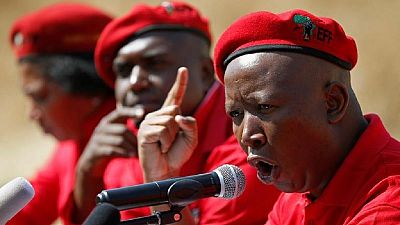 Zimbabwe government’s plans to compensate white farmers who lost their land years ago in a fast-track land reform programme that has angered a South African firebrand politician, Julius Malema.

According to Malema, the leader of the Economic Freedom Fighters, EFF, President Emmerson Mnangagwa was being a sellout by agreeing to compensate the farmers.

Speaking in Johannesburg, Malema said it was particularly worrying for a financially burdened country as Zimbabwe to find money for other reasons than alleviating poverty.

That country is swimming in a pool of poverty; they can’t afford basic things like primary health, proper education and infrastructure. He gets money and goes to give it to people who are not deserving.

“It’s a sellout position. The way he is going about it, he is not going to finish his term,” Malema said.

“That country is swimming in a pool of poverty; they can’t afford basic things like primary health, proper education and infrastructure. He gets money and goes to give it to people who are not deserving. He is reversing the gains of the revolution struggle. It’s unsustainable,” he added.

The Zimbabwe government and ruling party, Zanu-PF, have stood by the decision charging Malema to stay off their internal affairs and justifying that the move was to win investor confidence.

“Government is clearing all obstacles that have hampered cordial and co-operative relations with Britain and the whole European Union bloc. The Second Republic is focusing on re-engagement.

“The compensation of the former white farmers is necessary to instill investor confidence. We are implementing a number of reforms that ensure that we create a clear break from the past and lay a firm foundation for investment. That is the (direction) this government has taken,” he stressed.

Zimbabwe’s government said earlier this week that it would start compensating white commercial farmers whose properties were seized nearly 20 years ago under Robert Mugabe’s land reforms.

In a statement, the finance and agriculture ministries said they had budgeted 53 million Zimbabwean dollars ($18 million) in payments to “former farm owners affected by the land reform programme and who are in financial distress.”