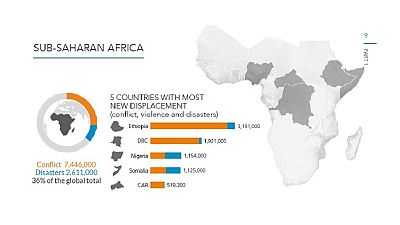 Ethiopia maintained an unenviable record of being the global leader in internally displaced persons driven out of their places of residence due to conflicts across the country.

Ethiopia has close to three million people displced by violent conflicts according to the latest results from the Global Report on Internal Displacement, GRID. It is jointly published by the Internal Displacement Monitoring Center, IDMC, and the Norwegian Refugee Council, NRC.

“The Democratic Republic of the Congo (DRC), Syria, Somalia, Central African Republic (CAR) and Afghanistan were again among the countries with the highest number of new displacements associated with conflict.

“New waves of conflict and violence triggered displacement in Nigeria and Cameroon, that were among the ten worst-affected countries globally.”

African countries made up seven of the 10 top countries with new displacements associated with conflict and violence in 2018. The only non African countries listed were Syria (3rd), Afghanistan (8th) and Yemen (10th).

Against a backdrop of important and many positive political changes, 2.9 million new displacements associated with conflict were recorded in Ethiopia, the highest figure in the world and four times as many as in 2017.

Old conflicts became more entrenched and new conflicts escalated along various state borders, prompting the government to establish a new Ministry of Peace in response to the increasing violence.

The Oromia region – the country’s largest and most populous region is involved somewhat with all the hotspots according to the report. The entire stretch of its common border with the Somali region is marked as an area most affected by the conflict.