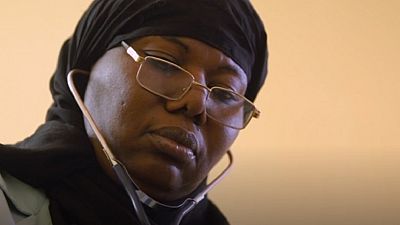 It was in 2012, that the intense insecurity in the Gao that caused Jamilla Amadou alongside thousands of others to from the extremist groups occupied the northern Mali city.

Now Jamilla is back despite ongoing insecurity in the region and using her skills as a nurse to help heal the sick and give shelter to displaced women. She says she loves her job because it helps the people of her region, especially the children.

During the occupation, the hospitals and public service facilities were ransacked, the equipment stolen or destroyed. Jamilla says the main local hospital, where she works, really suffered.

We're not going to give up.

“It was looted in April 2012,” she says, adding, “everything was stolen. We had nothing – no doors, no windows, nothing. There was nothing here. They took everything.”

UNHCR, along with NGOs and partner organisations, have helped rebuild the hospital, which serves thousands of Malians and refugees who seek safety in Gao. Outside the hospital, UN peacekeepers and Malian soldiers patrol the streets. It’s security of a kind, and has encouraged people to come to the city.

At her home, Jamilla continues to care for others. She has offered shelter to girls who fled nearby villages when armed bandits attacked. But even in Gao, the refugees are vulnerable, as they know no-one in the city, so Jamilla has turned her home over to 30 women and their children.

Jamilla says she, and others like her, will help remake the city, and rebuild lives there.
“We’re not going to give up. We’ll continue to fight until the last breath. Should we give up? I mean, this is our region. This is our home town,“she says.

Northern Mali was occupied by Islamic radicals following a military coup in March 2012.
The al-Qaida-linked extremists were driven out of cities in the north following French military intervention.