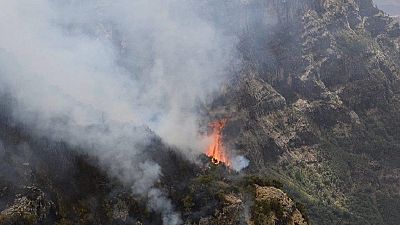 Israeli firefighters are the latest addition to a growing list of experts in Ethiopia to help authorities deal with a rampaging forest fire that has hit the Semien National Park in the northern Amhara region.

Fire have been raging in parts of the historic national park for the past few months but it wasn’t until last week that external intervention was sought for to combat the crisis.

Experts from South Africa, Kenya and France were among the first to offer their assistance as of last week. Media reports quoting an Amhara regional state official said after weeks of battling fires, a renewed forest fire had broken out as of April 9.

The Times of Israel said the team joining the efforts “is being led by Zion Shenkar, who was born in Ethiopia and was the Israel Defense Force’s first-ever battalion commander from the Ethiopian community.”

Local media portal, Addis Standard added that the fire has been on and off for the last two weeks with efforts aimed at controlling it largely unsuccessful. South Africa agreed to send six firefighter planes to help.

Kenya which is also dealing with a similar case in the Mount Kenya area could not deliver on its promised assistance as at close of last week. The regional state president admitted yesterday that the issue had gotten beyond their control and needed federal intervention.

The nature of gorges and the landscape of the area is also said to be a major contributory factor that largely hampered earlier efforts at extinguishing the blaze.

A BBC reporter said: volunteers and residents had joined in the effort to put out the blaze. Another fire broke out in the park last month, destroying 340 hectares (840 acres) of forest and grass. The cause of the fires have yet to be established.

Team of Israeli firefighters landed in #Ethiopia and is on its way to #Simien Mountains National Park to assist Ethiopian authorities in putting out the raging fires in the unique world heritage site ????

About the Semien National Park

It is a 220 sq-km (84 sq-miles) park, in Ethiopia’s highlands, sometimes referred to as the “Roof of Africa” given that it forms the largest continuous area of elevation on the continent.

The park is listed as a UNESCO World Heritage Site, and is home to some rare animals such as “the Gelada baboon, the Simien fox and the Walia ibex, a goat found nowhere else in the world.”

Its summit, Ras Dashen (4,550 m), is the highest peak in Ethiopia. Lake Tana, the source of the Blue Nile, also lies in the northwestern portion of the Ethiopian Highlands.