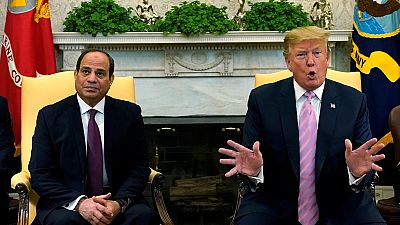 President Donald Trump of the United States has described his Eygyptian counterpart Abdel Fattah Al-Sisi as a ‘great president … doing a great job” in the north African country.

The two leaders met at the White House on Tuesday during an official visit by the Egyptian leader. This trip is his second meeting with Trump in a space of two years.

The main blocs of the meeting was around the issues of the fight against terrorism and the area of trade. Trump said relations between the two nations was at an all-time high.

A core issue that came up was the possibility of Al-Sisi extending his stay in office via constitutional reforms which are currently underway. Trump all but evaded the question stressing how great his counterpart was doing in managing Egypt.

Human rights groups have criticized the Egyptian government’s clampdown on dissent and have tasked lawmakers to take stern action against infractions by the government. Al-Sisi won 2018 polls in what is his second term.

We have many things to discuss, as you can imagine: military, trade. And I have to say that a lot of progress has been made in a lot of different ways, in terms of terrorism and others things, with Egypt and within Egypt.

It’s really incredible what’s happened, especially in certain respects that we’ve already talked about. But we will be meeting with representatives of the President and of Egypt in a little while.

Again, we have very, very important things, militarily, to talk about. And also about trade. A big trading partner. We do a lot of work together. We work together. And I think we’ve never had a better relationship — Egypt and the United States — than we do right now.

Thank you, Mr. President. Allow me to express my thanks for your kind invitation and for providing me this opportunity to meet and talk about making a quantum leap in the strategic relationship between Egypt and the United States.

Let me emphasize, Mr. President, that the relations have not been better over the years of our bilateral relationship, and that is why I’m extending, Mr. President, to you our thanks, appreciation, and greetings for (inaudible).

All the credit goes to you, Mr. President. Thank you very much for your support on all fronts. This is what we’re seeking to promote our bilateral relations in various fields: political, economic, military, cultural, and others.