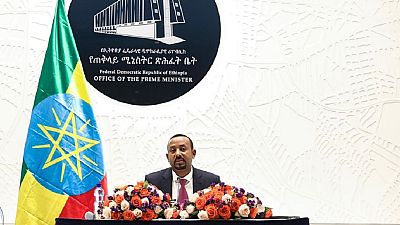 Ethiopian Prime Minister Abiy Ahmed has apologized for the deteriorating security situation that saw over a million and half Ethiopians displaced months after he came into office.

Speaking at a rare press briefing at his office complex in the capital Addis Ababa, he said a million people have returned to their places of origin.

“When I came to the office there were 1.1 million displaced people. After I came, an additional 1.5 million people were displaced. It is shameful that this happened in a time of change,” he told journalists.

The cause of most displacement was down to inter-ethnic tensions which were largely centered in his home region, Oromia. The majority of displaced were also sheltered in the region.

Over the period, most of the affected persons had refused to return to their homes citing the continued state of insecurity. The breakdown for the current returns are yet to be made public. International aid agencies have also yet to corroborate the figure by the Prime Minister.

Abiy also stressed the importance of ensuring security to prevent displacement in the first place, adding, “we are taking strong legal measures to ensure the rule of law is respected.”

Exactly a year ago, the ruling coalition, Ethiopian Peoples Revolutionary Democratic Front, EPRDF, elected Abiy as its leader before he took office on April 2.

Abiy also spoke on issues within the EPRDF which he has led for a year with head spinning reforms at the coalition and national level in his capacity as Prime Minister and leader of government business.