Obama calls for solidarity towards victims of Cyclone Idai 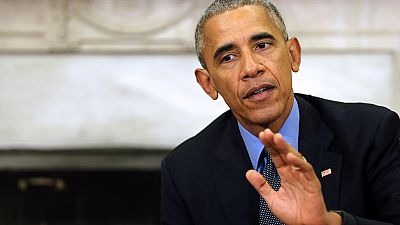 <p><strong>Former United States president Barack Obama on Wednesday called upon Americans and citizens of the world to help families affected by the floods in the Midwest of the country, and Cyclone Idai in Southern Africa.</strong></p> <p>In two tweets shared on his official Twitter account, Obama shared articles showing different ways in which to help the victims of the natural disasters.</p> <p>‘‘Suffering and loss on two sides of the world calls for solidarity and strength from all of us,’‘ read part of the tweets.</p> <blockquote class="twitter-tweet" data-lang="en"><p lang="en" dir="ltr">And here are some ways to help cyclone victims in Mozambique, Malawi, and Zimbabwe: <a href="https://t.co/if8HZBtWBH">https://t.co/if8HZBtWBH</a></p>— Barack Obama (@BarackObama) <a href="https://twitter.com/BarackObama/status/1108372768796626945?ref_src=twsrc%5Etfw">March 20, 2019</a></blockquote> <script async src="https://platform.twitter.com/widgets.js" charset="utf-8"></script> <h2 style="font-size:16px;">Rescuing people from Cyclone Idai</h2> <p>One week after Cyclone Idai ripped through Southern Africa, rescuers on Thursday plucked more survivors to safety from trees and roofs.</p> <p>Helicopters whirred above the turbid, red-brown flood waters searching for people to ferry back to the port city of Beira, headquarters of the huge rescue operation in Mozambique.</p> <p>The death toll in that country was now 242, Land and Environment Minister Celso Correia said, adding that the number of dead was rising as rescue workers found bodies that had been hidden by Cyclone Idai’s now-receding floodwaters.</p> <p>Correia told a news conference that around 15,000 people, many of them very ill, still needed to be rescued. “Our biggest fight is against the clock,” he said, adding that 3,000 had been rescued so far.</p> <p>In neighbouring Zimbabwe, the confirmed death toll jumped to 139. President Emmerson Mnangagwa, declaring two days of national mourning from Saturday, described scenes of “unmitigated despair” in Rusitu, near the border with Mozambique.</p> <p>In Malawi, 56 people were confirmed dead.</p> <a style="font-size:16px; font-color:yellow;" href="https://www.africanews.com/2019/03/21/mozambique-malawi-zimbabwe-braced-for-cyclone-idai/"target="_blank"><span class="caps">READ</span> <span class="caps">MORE</span>: Desperate rescue efforts as death toll from Cyclone Idai mounts</a>

Suffering and loss on two sides of the world calls for solidarity and strength from all of us.