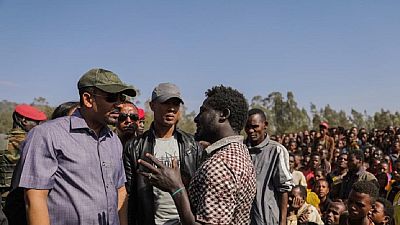 Ethiopian Prime Minister Abiy Ahmed on Sunday travelled to assess the state of the Gedeo community whose displacement has been the subject of wide media coverage in the last few months.

Abiy’s office said he made the trip to Gedeb Woreda on Sunday as part of efforts to listen to their grievances and to hold discussions with their representatives.

Thousands of people are seen in an open area in photos shared by the PM’s office. The Gedeos are located in the Southern Nations, Nationalities and Peoples’, SNNP, region.

According to United Nations statistics, majority of Ethiopia’s displaced and persons in need are in Abiy’s home region – Oromia – SNNP comes third after the Somali regional state in second position.

PM Abiy Ahmed travelled to Gedeb Woreda this morning to assess the state of Gedeo community members currently in temporary shelters. Members of the displaced expressed their grievances to PM Abiy Ahmed, who is at the moment holding discussions with representatives.#PMOEthiopia pic.twitter.com/zN45tlM3iU

The northern Tigray region as at Saturday had donated five million birr to help the displacement crisis in the region. Other planks of assistance was the imminent dispatch of team of medical professionals to the area.

Despite the wow factor that Abiy has planted in Ethiopia’s political and democratic space since a year ago, the incidence of internal insecurity and displacement has been tagged a blot.

Ethiopians also launched a public funding move to help thousands of Gedeo IDPs displaced as a result of Gedeo-Guji crisis. The Go Fund Me campaign has raked close to $930,000 out of a $1.2m goal as at midday March 17 (Ethiopian Time).

The United Nations office in the country recently reported that over eight million people needed food aid, a 5 percent rise from last year, due to a surge in violence that has triggered mass displacement as well as the lingering effects of past droughts.

The crisis has prompted an Ethiopian government appeal for $1.3 billion to provide emergency food and non-food assistance for 8.3 million people.

“The impacts of the climate change-induced droughts of 2016 and before have persisted. Moreover, violence in many parts of the country have added to the burden,” said Mitiku Kassa, Ethiopia’s commissioner of national disaster risk management.

Around 3 million people remain displaced in the Horn of Africa country of 100 million, according to the United Nations, largely due to a spate of ethnic clashes, mostly in the southwest and east, since last year.

The outburst of violence has overshadowed reforms initiated in late 2017 with mass releases of political prisoners that were intended to reduce tensions triggered by anti-government protests in 2015.