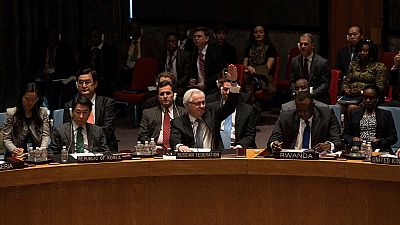 Russia on Friday accused the United States of refusing to embrace the existing peace deal between warring groups in South Sudan.

Moscow abstained in a vote at the UN Security Council to adopt a US-drafted resolution that called on South Sudan’s leaders to show further political will to advance peace.

The resolution, which also renewed the mandate of the UN peacekeeping force in South Sudan (UNMISS) for a year until 15 March 2020, was supported by 14 of the 15 council members.

The peace agreement is stalling and is at risk of collapse if more political deals aren't struck.

The five-year war has killed tens of thousands, uprooted more than one third of South Sudan’s 12 million people and has seen horrific levels of sexual violence along with brutal attacks on civilians.

Russia complained that the measure failed to welcome the peace deal brokered by Sudan and signed in September, saying this sent “the incorrect signal” to Juba’s warring sides.

“We are disappointed by the stubborn reluctance of colleagues to welcome the Khartoum agreement,” said Russian Deputy Ambassador Dmitry Polyanskiy.

Russia also said the US resolution prioritised gender and human rights issues over implementation of the peace deal.

China also voiced disappointment at the council’s failure to strongly support the peace pact, but nevertheless voted in favor of the resolution.

What does the US want?

The resolution described the peace agreement as “an important step forward” and a “window of opportunity” but called on leaders to “demonstrate the political will to peacefully resolve the conflict”.

The measure stressed that key provisions — which are still under negotiation — on power-sharing and security arrangements for the return to Juba of opposition leaders were “essential” to advance the peace process.

“The US remains deeply concerned by the lack of political commitment from the parties at the national level to fully implement all tenets of the agreement,” US Acting Ambassador Jonathan Cohen told the council after the vote.

UNMISS is henceforth charged with protection of civilians; fostering a secure environment for the safe, informed, voluntary and return or relocation of internally displaced persons and refugees; creating suitable conditions for the delivery of humanitarian assistance; monitoring and investigating human rights violations; and supporting implementation of the Revitalized Agreement and the peace process.

Is the peace deal holding?

The peace deal provides for a power-sharing government that will prepare elections, but it has been greeted with skepticism after many previous agreements failed to take hold.

A previous peace agreement fell apart when heavy fighting broke out in Juba in July 2016 following the return of Machar, who was forced to flee on foot, chased by tanks and helicopter gunships.

Under the latest deal, Machar is scheduled to return to Juba in May to once again take part in a transitional government as vice president.

The Brussels-based International Crisis Group (ICG) on Wednesday warned that the six-month-old peace deal is doomed to collapse unless the sides can settle a string of disputes.

“The peace agreement is stalling and is at risk of collapse if more political deals aren’t struck,” said Alan Boswell, the group’s South Sudan analyst.

The deal called on the two main rival factions to assemble, screen and train their respective forces and unify them into a national army before the formation of a unity government in May.

None of these steps have occurred, just two months before the deadline, the ICG report said.

There were also unresolved disputes over local boundaries – which some sides felt Kiir had redrawn to benefit his Dinka ethnic group, the report added.