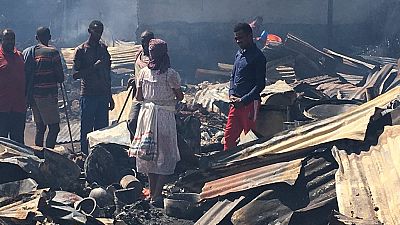 A fire outbreak destroyed hundreds of houses in the city of Bahir Dar, located in Ethiopia’s Amhara regional state. The inferno has left thousands homeless even though there has been no report of a fatality.

Local journalists reported that the fire is believed to have started after a gas explosion next to a hotel spread quickly because of slum structures close to the fire source.

A fire truck that arrived at the scene according to a journalist did not have enough water really. The police chief is also said to have failed to reach the airforce fire brigade for assistance.

Photos shared on social media show extensive damage across the affected area. People who were lucky to escape the area are seen with the only belongings that they could salvage.

Regional authorities have yet to ascertain the exact cause of the incident. Bahir Dar is the capital city of the Amhara region in northern Ethiopia. It’s a port on the south shore of the huge inland Lake Tana.

75 year old Ayelew is among those who lost everything in the fire. Only managed to get out of the house with the clothes he has pic.twitter.com/nI3cw15u04