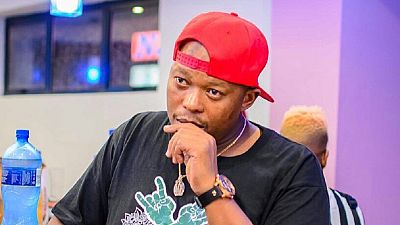 A South African musician Mandla ‘Mampintsha’ Maphumulo has been arrested after social media outrage followed a viral video that showed him beating his partner, another musician.

An instagram post from the handle of his partner, Babes Wodumo, showed an angry Mampintsha repeatedly slapping her whiles sternly issuing warnings. The said video has since been deleted.

Babes Wodumo, whose real name is Bongekile Simelane, said she was traumatized by the episode and had opened an assault case against her partner.

The Police Service confirmed the arrest adding that: “He will be processed and will appear in court soon.” The assaulted musician is however scheduled to address the media on Tuesday.

#sapsHQ The Suspect in the Babes Wodumo case has been Arrested and is currently in police custody. He will be processed and will appear in court soon. ME pic.twitter.com/5dCxgTmGpS

South Africans took to especially Twitter calling for justice for the assaulted entertainer, Babes Wodumo. The government and opposition united in the call for action to be taken.

The ruling African National Congress (ANC), Economic Freedom Fighters (EFF) and the Democratic Alliance (DA) joined the calls for Mampintsha’s arrest, saying it will go a long way in tackling the chronic issue of domestic violence in the country.

Greetings
We would like to thank everyone for the messages support about the early morning video. unfortunately Babes can't be able to have any interviews for now as she is still emotional about the situation. She will issue the statement on her social media platform later today