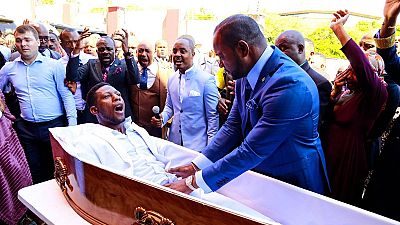 The governments of South Africa and Zimbabwe have been compelled to react to the story of a pastor in South Africa who claimed to have performed a resurrection miracle on Sunday.

The video of the man being ‘raised from the dead’ upon the laying of hands by Pastor Lukau has since gone viral, attracting ridicule on social media and an investigation from South African authorities.

Congolese born Pastor Lukau of Alleluia Ministries performs a resurrection miracle, raising a man from the dead in front of a crowd of people at his Sandton church, north of Johannesburg.

A video of the reported resurrection showed Lukau laying his hands on a body dressed in white, and lying in a coffin. The man dramatically sits up in the coffin, at the ‘Rise Up’ instruction the pastor.

Summary of the video

The video(s) and pictures showing the ‘resurrected’ man dramatically eating his first meal after the miracle, are posted on social media and quickly go viral.

Africans all over the continent started posting their own ‘resurrections’, depicting the drama in the original Lukau video, in what is being called the #ResurrectionChallenge.

Beyond the mockery, Lukau and his congregation would soon be at the receiving end of backlash.

On Monday, Kings and Queens Funeral Services, posted a statement on social media, distanced itself from the resurrection miracle.

“As Kings and Queens Funeral Services, we would like to distance ourselves from the supposed resurrection,” the company wrote in a statement.

“We are in the process of taking legal action for this malicious damage to our image.”

The funeral service provider said it had only provided a hearse and transport a body from a residential area in Lyndhurst and transport it to the church.

The Commission for the Promotion and Protection of Cultural and Religious Rights (CRL) announced on Tuesday that it will be investigating the incident.

Aleluia church had since distanced itself from the controversy, saying ‘it was not a resurrection video’.

Eliot has also been since identified as 29-year-old Brighton, from Zimbabwe, who works at a timber company in Pretoria. His employers told local media that Brighton was last seen on February 19.

Zimbabwe’s Consul-General to South Africa Batiraishe Mukonoweshuro told the Herald newspaper that no repatriation papers had been filed to support the claims by Elliot’s family.

According to him, it would not have been possible to apply and get clearance for a Sunday repatriation for a man who died on Friday, since the process can only be done during weekdays and takes more than one day.

Who is Pastor Lukau?