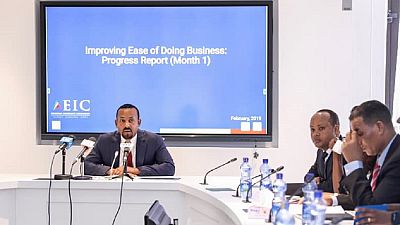 Ethiopia continues to work towards improving ease of doing business in the country as part of wider economic reforms of the Abiy Ahmed led government.

The move according to the Prime Minister’s office is to help create a conducive environment for businesses to start up and to also have access to finance.

The result of a good business atmosphere and finance the PM said will be a “means of tackling structural problem of unemployment.” Ethiopia, Africa’s second most populous nation suffers a high unemployment rate.

The Premier met with the Ethiopia Investment Commission, EIC, on Tuesday to review progress on performance of the ‘Doing Business Initiative’ government is currently undertaking.

Abiy also stressed that in addressing access to finance problems faced by many startups, a revision of lending practices which allows putting up movable assets as collateral is being put in place.

Ethiopia since Abiy took over in April 2018 has been undergoing a raft of reforms. Under the economic reform sector, Abiy has reiterated his resolve to open up a hitherto government-controlled economic space.

Security watchers have severally said that Ethiopia needs as much economic reform as it does political and human rights reforms.

Security is the other area that Abiy has been tasked to get a grip on in order to consolidate the reform gains chalked in under a year.

Since last year, government disclosed that it was planning to open up state monopoly companies to private investors. The Central Bank also revised some restrictive measures on loans and the general financial system.

“Prime Minister Abiy Ahmed stressed that cutting bureaucratic bottlenecks in these processes will enable focus investment areas of electricity, mining, housing, manufacturing and Small and Medium Enterprises (SME’s) to be effective,” his office added in a tweet.