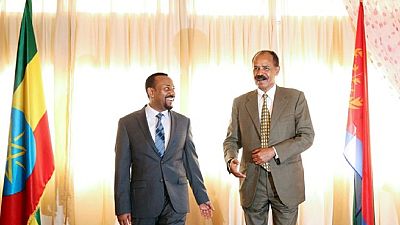 A delegation of high level Eritrean officials led by the country’s foreign minister to assess progress made in the bilateral cooperation that was renewed when the two countries signed a peace deal last year.

The delegation also attended the final musical concert staged by a visiting Eritrean cultural troupe, at the Millenium Hall in Addis Ababa on Thursday.

The Fourth and final leg of the cultural and musical concert by the visiting Eritrean public and cultural troupe is being held at the Millenium Hall in Addis Ababa this evening (February 21). #Ethiopia #Eritrea NEBGET https://t.co/bD0KJhxuPl pic.twitter.com/1W1EVupNcG

The troupe also performed in the Ethiopian cities of Bahir Dar, Adama and Hawassa, as it seeks to celebrate the Comprehensive Peace Agreement signed last year, and enhance people-to-people ties.

“Besides entertaining the public and celebrating the peace, the music and cultural shows have been proven fruitful in enhancing the peoples’ goodwill for the realisation of the two countries political and economic agendas,” explained Redwan Hussein, Ethiopia’s ambassador to Eritrea.

The Ethiopian Public Diplomacy and Cultural Group is expected to travel to Eritrea next month to also showcase musical and cultural performances.

The plan is to establish a joint commission that works to guarantee that the peace deal benefits the people of both countries, according to Redwan.