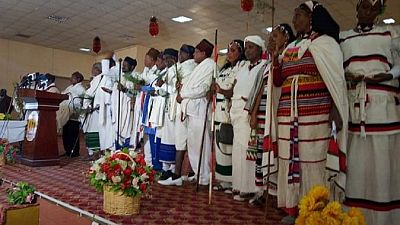 Ethiopia’s regional state of Oromia and the Oromo Liberation Front (OLF) agreed to a ceasefire on Thursday, following months of sparring amidst rising insecurity in the region.

The reconciliation pact was signed by Milkesa Mideksa of the Oromia state and Dawud Ibsa, chairperson of OLF.

The two sides agreed to avoid bloodshed and forge a peaceful future together, state-affiliated Fana BC reported.

The event held at the Ambo University in the Oromia state was attended by Oromo traditional leaders and several representatives of political parties.

OLF was one of the terrorist groups which benefited from a legislative process that overturned the tag, as part of prime minister Abiy Ahmed’s reforms.

Peace talks between the federal government and OLF in Asmara led to their return to engage in peaceful struggle.

OLF has previously accused Ethiopia’s government of failing to abide by an agreement aimed at reintegrating OLF fighters into the national army.