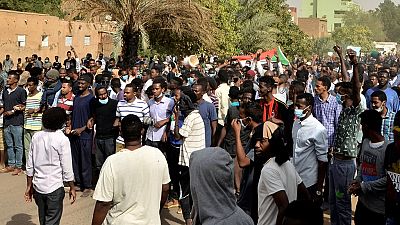 According to Sudania 24, the state prosecutor’s office issued the warrants under articles 66, 69 and 77 of the Criminal Code and Article 17 of the Cybercrime Act.

Security officials in Sudan have killed dozens of protesters and rounded up 100s since widespread anti-austerity protests began last month.

The channel pointed out that the legal articles are related to “incitement, public disturbance, dissemination of false news, disturbing peace and public tranquillity, and distorting the reputation of natural and corporate figures”.

Activists and journalists inside and outside Sudan rely on social networking sites to spread news of the protests in the country by broadcasting pictures and videos of demonstrations.

Those indicted were journalists and electronic activists, including 28 residing outside Sudan. Arrest warrants were issued against them, according to Sudania 24.

As protests in #Sudan continue, authorities have killed dozens of protesters and arrested doctors and injured demonstrators. Hundreds remain detained without due process.https://t.co/1zycQcsfLy pic.twitter.com/tLpRfxP7PA

The state prosecutor’s order comes as Sudan marks one month since protests against the deterioration of living conditions first began on December 19. The rallies expanded to demand the overthrow of the government of President Omar al-Bashir, who has been ruling for nearly 30 years.

The country’s economic crisis is driven by an acute shortage of foreign currency and soaring inflation that has more than doubled the price of food and medicines.

However, the president has held several emergency meetings with his cabinet and ruling party, which Morgan said shows just how concerned the government is regarding the ongoing protests.

On Friday, protests were renewed in a number of districts in the Sudanese capital of Khartoum. The Sudan Doctors’ Committee announced the death of a demonstrator in the district of Burri, east of Khartoum, from his wounds, raising the death toll to three from Thursday and Friday’s demonstrations.

United Nations Secretary-General Antonio Guterres said on Friday that he was “very worried” about the situation in Sudan.

“We strongly encourage the government to be very attentive to the respect of human rights,” he told reporters in New York.