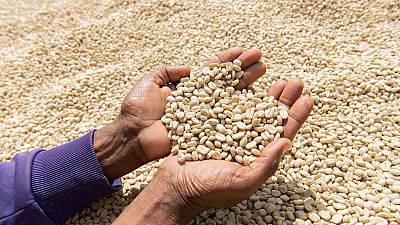 In the highlands of Ethiopia, coffee farmers are seriously thinking about calling time on an industry that has sustained families for a generation.

Over the past year, the amount farmers like Yoseph Lima get for a kilogram of coffee beans has fallen a third to 8 birr or just 29 cents, reducing his income from a cappuccino sold in the West for $3 to $4 to under a cent.

Unlike producers of commodities such as oil and natural gas, coffee farmers have long suffered from being at the wrong end of the value chain.

The price of coffee has certainly gone down. However, we cannot stop growing coffee just because the price has gone down. We are not going to be lazy.

“The price of coffee has certainly gone down. However, we cannot stop growing coffee just because the price has gone down. We are not going to be lazy. Even the price of gold fluctuates on the international market let alone coffee,” Lima said.

But at the other end of the chain, coffee has never been hotter. Millennials in the West who grew up with Starbucks drink lots and have fuelled a proliferation of coffee shops as well as innovations from cold brew to nitrogen coffee.

The industry has also seen a wave of acquisitions as companies such as Nestle, JAB Holding and Coca-Cola spend billions to boost their market share.

A slump in global coffee prices to their lowest in nearly 13 years is raising questions about whether it’s worth growing beans at all in some of the traditional coffee heartlands of Central America, Colombia, and Ethiopia.

“If the price of coffee continues to fall like this, the situation will force the farmer to consider changing to growing other crops. So far they have not done that because the government is subsidizing them by making different contributions such as supplying coffee trees and providing training,” said head of Shebedino Agricultural Bureau, Tesfaye Dora.

For struggling farmers, though, times are tough. Growers around the world have warned coffee company executives in the West of a growing “social catastrophe”, unless they can help to raise farmers’ incomes.

Fierce competition between large retailers has helped drive down prices, and consumers often respond less to information about the provenance of the product in supermarket aisles than when soaking up the ambiance of a coffee shop, analysts said.