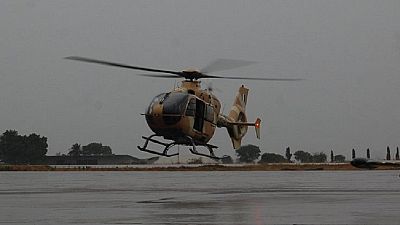 Five officers of the Nigerian Airforce, NAF, died in an accident in the northeastern Borno State whiles engaged in anti-terrorism combat.

NAF reported on Wednesday evening that it had lost a helicopter in combat, whiles the officers were providing air support for troops on the ground in the town of Damasak in Borno.

“The mission was part of the ongoing counterinsurgency operations in the North East. The incident, occurred about 7:45 pm today, 2 January 2019,” the statement read in part.

In an update of the incident, NAF’s Director of Public Relations said five officers who were aboard the Mi-35M helicopter were lost.

“It is with a heavy heart that I announce the death of the 5 crew members who were on board the Nigerian Air Force (NAF) Mi-35M Helicopter which crashed in combat yesterday, 2 January 2019, while providing close air support to troops of 145 Battalion, Damasak in Borno State.”

The statement also confirmed that the Chief of Air Staff had flown to Maiduguri today, 3 January 2019, to convey the condolences of the Commander-in-Chief of the Armed Forces of Nigeria, President Muhammed Buhari, to personnel of the Air Task Force Operation LAFIYA DOLE (Peace by all means) over the unfortunate loss.

Operation Lafiya Dole is the main anti-terrorism combat aiming to root out the activities of Boko Haram and other insurgent groups in the restive region.

The deceased personnel, whose remains have been recovered to Maiduguri, capital of Borno State are: