Rebecca Garang returns to Juba after years in exile 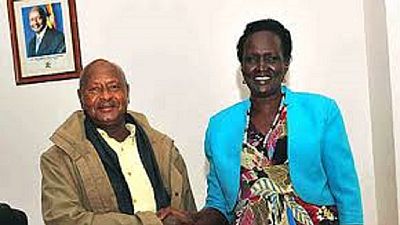 She is the wife of the late founder of the SPLM/A, Dr. Garang, who died in a plane crash in 2005 after a month of signing the CPA with Sudan government led by President Omar al-Bashir. Garang’s death led to Salva Kiir’s takeover of the party leadership.

We have come here to join the people of South Sudan so that we put our hands together and our heads together for peace.

Rebecca Garang, a former gender adviser to President Kiir, has been a critic to Kiir government, she claimed the ruling party has lost its visions and missions under Kiir’s leadership.

In the aftermath of a conflict, Ms. Garang fled a country and has been loosely associated with the SPLM “Former Detainees,” high-level SPLM politicians who were arrested by President Kiir administration in December 2013, accused of treason.

Garang’s widow, who claims that she is the ‘mother of a nation for all’, also joined president Kiir in an apology for the immense suffering caused by the country’s five-year civil war, which killed nearly 400,000 people and forced over 3 million people from their homes.

“There is no leader without people and there are no people without the leader,” . So we are begging the people of South Sudan to give us another opportunity for three years so that we can lead them,” she said.

“We are happy to receive Mama Rebecca and her delegation. We are very happy because peace has been restored in South Sudan,” said Tut Gatluak, the presidential adviser for security affairs, who received Rebecca Garang and her team on behalf of the government.

However, senior officers from the SPLA-IO include the wife of Riek Machar and other armed groups are in Juba to fasten the implementation of the peace process.

Though international community is skeptical about this Khartoum peace, the returned of former detainees and the presence of SPLA-IO members and other armed groups in Juba, drew glimpse hopes for this effective and productive peace.