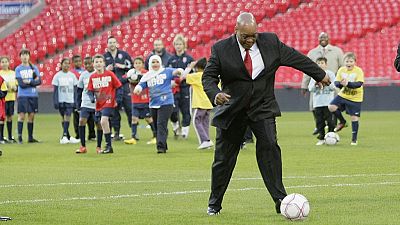 South Africa’s former president, Jacob Zuma, who recently joined Twitter has continued to amass and impress his followers with video content, the latest being a clip of him playing football with children.

The 49 second video that shows the 76-year-old running around a pitch and kicking a football, was captioned with a message to the coach of the national football team.

Zuma, who was president of South Africa from 2009 until 2018, joined the microblogging site last week and has since amassed over 100,000 followers, engaging them with a mix of video tweets and messages busting fake news about him.

The ex-president’s skills impressed many of his followers and caught the attention of Cape Town City football club, who tweeted, saying ‘Baba uCoach Benni is watching’.