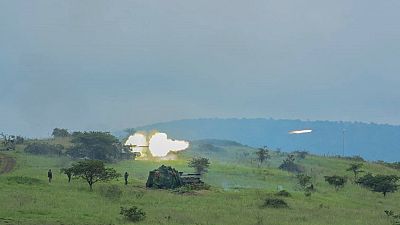 At least two Rwandan soldiers and an unknown number of rebels were killed when a group of attackers crossed into Rwanda from the Democratic Republic of Congo this week, President Paul Kagame said on Friday.

Kagame said the group, who crossed into the border town of Rubavu, may have been carrying out an attack to test Rwanda’s defences.

“I think a couple of soldiers were killed, a couple meaning two, three (from Rwandan side). We are still gathering sufficient information in terms of where they were coming from, assistance they had,” he told a news conference.

We are seeking clarification and collaboration from the authorities in Congo, cooperation in understanding what enabled this to happen.

“We are seeking clarification and collaboration from the authorities in Congo, cooperation in understanding what enabled this to happen,” he said, adding the attackers suffered a number of casualties.

While Kagame did not identify the group, rebel groups among those operating in the Democratic Republic of Congo include the Democratic Forces for the Liberation of Rwanda (FDLR).

A spokesman for FDLR said on BBC Kinyarwanda radio on Tuesday that they attacked Rwanda as they were pushing Rwandan troops who had tried to forcibly repatriate Rwandan refugees in Congo.

The FDLR includes former Hutu militiamen responsible for Rwanda’s 1994 genocide who then fled into eastern Congo. Its presence on Congolese soil has been cited as a reason for a series of military interventions by Rwanda.

Kagame left open the possibility that the attack may have been mounted by a new group called RNC, one of several other groups which he said had joined forces with FDLR.

Millions died of conflict, hunger and disease during a 1998-2003 war in eastern Congo, fuelled by Rwandan intervention, and the region remains plagued by dozens of armed groups that exploit its vast reserves of gold, diamonds and other minerals.