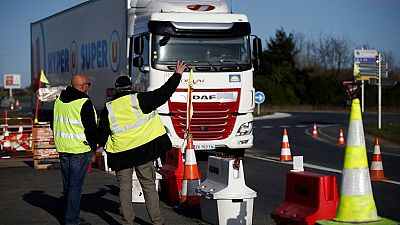 Traders in Egypt say they have been instructed to restrict the sale of ‘yellow vests’ to companies, and avoid selling to individuals, signalling fears of possible protests inspired by those in France.

The move comes ahead of the eighth anniversary of the uprising that toppled Egypt’s longtime president Hosni Mubarak in February 2011 and left the country in political and economic turmoil.

“We received instructions from the police around a week ago to sell yellow vests to companies only, and not to individuals,” one importer said.

National security officials came by and asked us not to sell them to individuals because they fear protests in France could reach us here.

He said two yellow vest shipments were currently en route to Egypt and that no instructions had been issued to halt such imports.

However, a rights lawyer, Mohamed Ramadan, was Tuesday remanded in custody for two weeks over charges including the distribution and possession of leaflets and yellow vests.

He was arrested on Monday in the northern city of Alexandria, his lawyer Abdelrahman al-Gohary said.

Launched in early November, weekly “yellow vest” protests in France against planned increases in fuel tax price have spiralled into violence in Paris and other cities, taking a heavy financial toll.

In a downtown Cairo street, several yellow vest sellers told AFP that their sale was being “prohibited” under instructions from police.

“National security officials came by and asked us not to sell them to individuals because they fear protests in France could reach us here,” one trader said.

The interior ministry spokesman did not immediately respond to requests for comment.

General-turned-president Abdel Fattah al-Sisi has repeatedly criticised the Arab Spring uprisings of 2011, pointing to their repercussions on neighbouring countries like Syria, Yemen and Libya.

His government has overseen harsh austerity measures including the removal of subsidies and introduced steep price hikes aiming to revive Egypt’s economy.