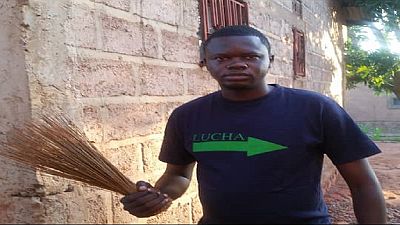 The pro-democracy Lucha movement in the Democratic Republic of Congo (DRC) announced on Friday that it was planning to file suit against Kabila’s handpicked successor, Emmanuel Ramazani Shadary “for misappropriation of public assets and personnel”.

Shadary, who has previously served as Kabila’s interior minister, is already facing European Union sanctions for his role in the repression of deadly anti-Kabila protests in 2016.

Lucha, which together with the powerful Catholic church in DRC, organised several anti-Kabila protests, have maintained their political activism even after Kabila decided not to pursue a controversial third term.

The end date for his process is December 23, 2018. Beyond that date, we should have new leaders.

Shadary, who was announced as the ruling party’s candidate in August, is facing competition from several opposition candidates, notably Martin Fayulu of the Lamuka coalition and Felix Tshisekedi, who is backed by veteran politician Vital Kamerhe.

The CLC collective, which groups together Congolese Catholic laypeople, on Friday warned against any delay in the transfer of power following the crucial December elections.

“The end date for his process is December 23, 2018. Beyond that date, we should have new leaders,” said the CLC collective.

The CLC was at the heart of three rallies calling for Kabila’s departure at the start of the year which prompted a brutal crackdown that left 15 people dead.

The group also cautioned against the use of controversial electronic voting terminals on December 23 when voters will choose a successor to Kabila, who has ruled this volatile nation since 2001.

The Lucha movement also weighed in on a bitter dispute over touch-screen voting machines that has divided the opposition.

“In view of the extreme sensitivity of the presidential election, paper ballots should be used,” a CLC spokesman said, with Lucha also urging people to take a stance against the use of touchscreen terminals.

Despite a wave of protests, the electoral board is standing by its decision to use 106,000 touchscreen electronic voting machines supplied by South Korea.

Lucha has also launched a campaign called “Let’s get rid of the underachievers”.

“These ‘underachievers’ who are hoping to be elected or reelected are found both among the ‘majority’ as well as among the ‘opposition’, in civil society and even among independent candidates,” Lucha said.