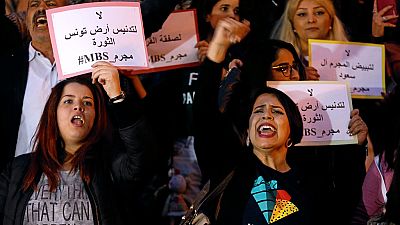 A protest is underway in the Tunisian capital, Tunis against a visit by Saudi Crown Prince, Mohammed bin Salman over killing of Saudi journalist, Jamal Khashoggi.

The Saudi crown prince is expected to arrive on Tuesday as part of a tour of several Arab countries on his first trip abroad since Khashoggi’s murder.

“I think it’s a mistake to receive him. You can’t do something like this while the people who elected you are in opposition. We, the people, elected you to your position so that you do what we agree to, to invite people we would like to host’‘ , said protester, Samah Bouhawala.

I think it's a mistake to receive him. We, the people, elected you to your position so that you do what we agree to, to invite people we would like to host.

“In our show we tried to establish the crimes committed by the Kingdom of Saudi Arabia. We also expressed our rejection of bin Salman’s visit and any other criminal leader”, said Ayoub Jaouadi, a performer and activist.

Khashoggi’s murder has strained Saudi Arabia’s ties with the West and affected its image abroad.

Tunisia’s journalists’ union and some 13 Tunisian civic and rights groups called for a protest at the central Habib Bourguiba avenue in Tunis, scene of the mass protests that toppled Ben Ali in 2011.

Saudi Arabia has said the crown prince had no prior knowledge of the killing of the Washington Post columnist at Riyadh’s consulate in Istanbul last month.