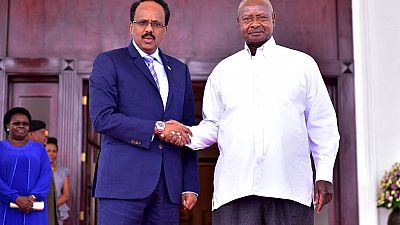 The two leaders discussed areas of cooperation between Somalia and Uganda particularly in the areas of peace, security, defence, education, trade and investment, said a State House statement.

“He [Museveni] noted that the Tripartite Agreement that had been concluded in September 2018 between Ethiopia, Eritrea and Somalia is being implemented adding that it has greatly led to the economic development of the three states. He further observed that if the objectives of the agreement framework were achieved, the initiative would facilitate the resolution of political differences and end conflict in the Horn of Africa Region”, the statement read in part.

I commend their excellencies Isaias Afwerki of Eritrea and Abiy Ahmed of Ethiopia for the timely conclusion of the Tripartite pact involving Somalia. This will ensure peace, stability & boost the economies of the three countries particularly Somalia, given her strategic location. pic.twitter.com/4zOn9jopRK

In September, the leaders of Ethiopia, Eritrea and Somalia signed a pact aimed at fostering comprehensive cooperation between them. The three countries also pledged to work in concert to promote regional peace and security.

Farmajo also briefed Museveni on the security situation in his country and the ongoing efforts to defeat Al shabab. Uganda is the biggest contributor of troops to the African Union Mission in Somalia (AMISOM), a 20,000 strong peacekeeping force deployed to pacify the Horn of Africa country in 2007.

I am happy to hear from H.E Farmajo that the security situation in Somalia has tremendously improved, notwithstanding the Al-Shabaab operations in the south of the country, the slight clan differences and negative media messages. pic.twitter.com/hDUq1OaTYG