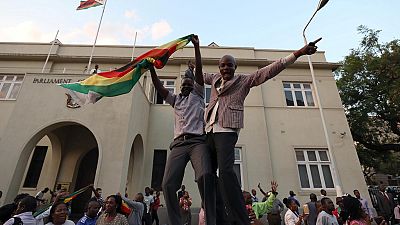 Zimbabwe’s main opposition leader Nelson Chamisa insists that little has changed in the country a year after the start of an army takeover that eventually led to the resignation of long-serving Robert Mugabe.

Chamisa tweeted a video of the late opposition leader, Morgan Tsvangirai, who speaking after the 2017 army takeover called for fundamental reforms to the governance structure.

“The governance culture is just replacing one individual with another individual. The same character, the same culture.

“So I think it is foolhardy to think that replacing Mugabe with Emmerson Mnangagwa without the fundamental reforms that are needed to transform the institution of governance, then you are wasting your time. You are just served the same perpetuation of the same culture.”

The legend said something fundamental! pic.twitter.com/3p7V58BRDf

Tsvangirai who was a former Prime Minister in unity government led by Mugabe died later in 2017. He was leader of the Movement for Democratic Change, MDC – Tsvangirai. He had met with then interim president Mnangagwa before his demise.

Mnangagwa at the time a fired vice-president exiled in South Africa returned to the country to takeover from Mugabe after the army took over and the parliament threatened to impeach Mugabe if he continued to hold on to power.

Mnangagwa has since won his first full term as president beating Chamisa in July 2018 elections. The MDC Alliance which garnered over 40% of votes allege that the elections body rigged the process.

A court action to overturn the outcome was dismissed. Chamisa has since launched a defiance campaign stating that the government lacked the legitimacy to run the country. Zimbabwe has been plunged into an economic crisis government is struggling with.