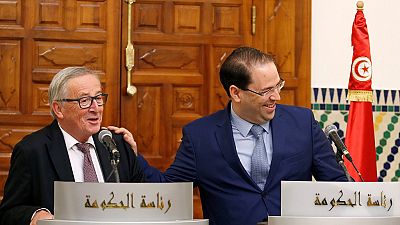 European Commission President, Jean-Claude Juncker on Friday in Tunisia said that plans by the EU to set up migrant camps in North Africa was no longer on the agenda.

EU member states are in disagreement over how the bloc should deal with tens of thousands of migrants arriving every year in Europe, the bulk of them by sea from Turkey and North Africa.

“I believe this is no longer on the agenda, and by the way it should have never become a topical issue,” Juncker said.

I believe this is no longer on the agenda, and by the way it should have never become a topical issue.

The European Commission had on Thursday signed four agreements with Tunisia worth €270 million , the first day of the official visit of the EU President to Tunisia.

In June, a summit of all EU leaders asked the Commission to study ways to set up “regional disembarkation platforms” in North African countries, including Tunisia, for migrants rescued by European vessels in the Mediterranean.

However, there has been little appetite in Africa and EU officials have long questioned the legality and practicality of such camps.