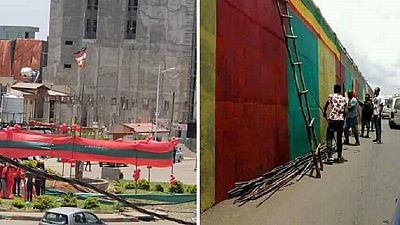 The United States and the United Kingdom have issued security alerts for the Ethiopian capital Addis Ababa ahead of the return of a former rebel group, the Oromo Liberation Front, OLF.

The scuffles between Oromo youth and city dwellers had as at Friday led to one death after federal forces clashed with protesters. The painting of public places in the OLF colours has been condemned by police who maintain that waving flags was not illegal under law.

City dwellers who have also reportedly taken the law into their hands by removing hoisted flags have been cautioned by the police chief. Incidentally, the flags they are also putting up is the green, yellow, red version – which is unofficial without the blue circle in the middle with a star.

OLF leadership are expected to quit their base in Eritrea and formally return home after it agreed a deal with the federal government weeks ago in Asmara. OLF will now engage in peaceful armed struggle.

On 12 and 13 September 2018, there was sporadic violence as large crowds gathered in various parts of Addis Ababa; with the planned arrival of the senior leadership of the Oromo Liberation Front (OLF) in Addis Ababa on Saturday 15 September 2018.

It is expected that large crowds will again gather; you should exercise particular caution around Addis Ababa and in particular anywhere where large crowds are gathering, as per the advice below; British Embassy staff have been advised to avoid the area around Meskel Square and the Stadium area on Saturday 15 September 2018.

There are frequent incidences of civil unrest in Ethiopia, including protests and strikes. Some of these can cause temporary closure of roads or disruption to local business and transport, and in the past some have escalated into serious violence. These incidents are often limited in duration and localised.

Where they occur, the British Embassy will advise staff to reconsider any travel plans they have to the specified area and not to travel until the situation has calmed. Similarly, you are advised to reconsider travel to areas where disturbances are reported.

This travel advice will flag incidents of concern, where British Embassy staff have received advice, but as unrest can occur with little or no notice you are also advised to monitor local news and, if you’re unsure, contact local authorities or reputable tour operators in the areas you’re travelling to.

Event: The U.S. Embassy is monitoring reports of protest and unrest throughout Addis Ababa, with police deployed in response. These incidents may continue through the weekend with little or no warning. Expect an increased police presence and be prepared for road closures.

U.S. Government personnel are advised to avoid non-essential road movements in Addis Ababa on Saturday, September 15, 2018, especially on Bole and Meskel Square Roads, and to limit movement in Addis Ababa until the end of the weekend.