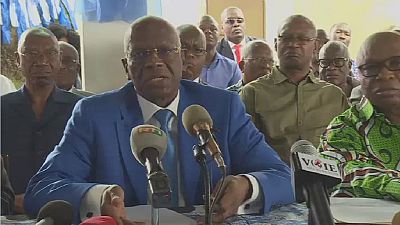 The Ivorian Popular Front (FPI) on Tuesday called for the postponement of the local elections slated for October. The opposition party leaders reiterated its call for reform of the Independent Electoral Commission (CEI).

Over a week ago, the Democratic Party of Côte d’Ivoire (PDCI), one of the country’s three main political parties and a former member of the ruling coalition, also requested a postponement of the elections.

“The FPI, mindful of the need to safeguard peace (…) demands the unconditional postponement of the local elections of October 13, 2018 and the immediate opening of inclusive discussions for the reform and establishment of a consensual IEC. We will go to these next elections and we will give ourselves the means to reform the Independent Electoral Commission,” declared Aboudramane Sangaré, the Acting President of the FPI, at a press conference at Laurent Gbagbo’s residence.

The next municipal and regional elections are scheduled for October 13 and the presidential election in 2020.

The FPI created by former President Laurent Gbagbo is going through a crisis between two rival camps. Pascal Affi N’Guessan, the current official president of the party is challenged by the rival camp of Aboudramane Sangaré, a relative of Gbagbo, presented as the “guardian of the temple” and who claims to be acting president of the party.