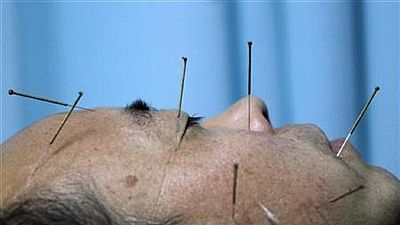 Acupuncture, a traditional Chinese therapy, is well received in the Republic of Congo, which promotes cultural exchanges between the two different countries.

Huang Yue, one of the two traditional Chinese medicine doctors with the Chinese medical team in the Republic of Congo, feels honored that he can help save lives in the country and spread knowledge of the oriental medical practice.

After the free clinics, many of the patients continued to receive acupuncture treatment.

Acupuncture treatments used to be something new to the African continent. Now there has been an increasing number of African patients who have accepted and received the traditional Chinese medical therapy. That highlights a new development of over five-decade old China-Africa medical cooperation.

China sent its first medical team to Africa in 1963. Since then, it has sent medical teams to 45 African countries on over 20,000 trips. The teams have provided 220 million people with medical services.

Traditional Chinese medicine treatment is becoming one of this team’s distinguishing features.