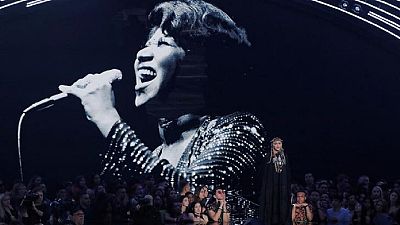 Sherrie who choreographed his hit video This is America, took to social media to thank Gambino and the fans for the support that saw the video win the Best Choreography, Best Direction and Video with a Message awards.

‘‘Thank you @childishgambino for the opportunity to collect your awards on your behalf and I’m so proud and honoured to be a part of this amazing video,’‘ Sherrie said.

She led me to where I am today, and I know she influenced so many people in this house tonight, in this room tonight.

Sherrie, who gained worldwide fame following the viral success of the video told the Interview Magazine that she blended a number of American and African dance moves, such as Nigeria’s Shaku Shaku and the Azonto from Ghana.

The video also inspired another viral video on the continent, This is Nigeria, which was done by Nigerian artist, Falz highlighting the issues faced by people in Africa’s most populous country.

The MTV awards show, which happened four days after the death of the ‘Queen of Soul’ Aretha Franklin, paid tribute to the music icon and legend.

“Queen of Pop” Madonna, who turned 60 the day Franklin died, led an impassioned tribute to Franklin as the music world paid its R-E-S-P-E-C-Ts to the superstar.

“She led me to where I am today, and I know she influenced so many people in this house tonight, in this room tonight,” said Madonna.

Franklin influenced generations of singers with iconic hits including “Natural Woman” and “I Say a Little Prayer.”

But “Respect” (1967) was her signature tune and the broadcast ended with a recording of Aretha belting out the Otis Redding cover as the audience danced wildly.

Cardi B started the show as frontrunner, narrowly taking more nominations than Jay-Z and Beyonce, who ended the evening with just one award, best cinematography, for their Louvre-shot video “Apeshit.”

But artist and video of the year, for “Havana”, went to former Fifth Harmony singer Camila Cabello.

Cardi B, who in little more than a year has become one of the most prominent women in the male-dominated world of hip-hop, also took best new artist.

Childish Gambino’s “This Is America,” which racked up more than 100 million views in its first week on YouTube with its powerful take on gun violence and racism, won best video with a message, choreography and direction.