Ugandan legislator fights for his life: gov't asked to #FreeBobiWine

Bobi Wine was one of several legislators and opposition supporters who were arrested following clashes with president Yoweri Museveni’s security forces on Monday, during campaigns in the West Nile town of Arua.

Bobi Wine has since been charged in the military court martial with unlawful possession of firearms while the other legislators and opposition supporters including the eventual winner of the Arua by-election Kassiano Wadri have been charged with treason.

He cannot walk. He was carried into the room where we saw him. He cannot sit straight. He speaks with difficulty and has a lot of pain breathing.

While the circumstances surrounding the arrest and subsequent charges were severely contested by many as being politically motivated, the focus has now switched to the physical state of Bobi Wine and his fellow legislator, Francis Zaake.

Both legislators were brutally beaten while in detention and are barely conscious four days after they were arrested.

Bobi Wine, who is currently detained at Makindye military barracks in the capital Kampala, can’t walk on his own, can barely talk and has several wounds all over his body, according to his wife and lawyers who have been allowed to visit him.

At the Makindye Military barracks where Bobi Wine is being held. The Chair of the Uganda Human Rights Commission, Lord Mayor, Bobi‘s wife, brother & one lawyer allowed to enter the barracks to see him. Personal doctor & other lawyers blocked pic.twitter.com/Rn6gmZZovi

In a statement posted on social media on Friday after she was allowed to see her husband for the first time since Monday, Barbie Kyagulanyi said ‘Bobi is in pain and is hurting everywhere’.

‘‘He cannot walk. He was carried into the room where we saw him. He cannot sit straight. He speaks with difficulty and has a lot of pain breathing. He has great pain in the left side ribs and hip. He is in such a terrible state and in need of urgent medical attention,’‘ read part of her statement.

Local Ugandan newspaper, Daily Monitor, reported that the other legislator Zaake, is currently on life support at Rubaga hospital in Kampala.

Uganda’s leader of opposition in parliament, etty Aol who visited Zaake told journalists that her colleague’s life was ‘on the mercy of God and we pray that he keeps him alive’.

“His condition is very bad. The people who tortured him did it with an intention of killing Hon Zaake. We hope that he gets better, Aol said.

On social media, Ugandans are rallying together using the hashtag #FreeBobiWine, to demand that government releases the legislator, so that he can receiver proper medical attention as requested by his family.

This is just sad. Sad sad sad sad. The police tortures the people instead of protecting them. This is our Constitution 'apparently' upholding freedom of speech. Does the Government realise that they are actually doing more harm than good- making them look worse? #FreeBobiWine https://t.co/Stnl6o6Af5

#FreeBobiWine
You promised to serve and protect but you arrested Bobi wine, beat him up very badly, why not put him in prison and take him to court after, where is the law and order in Uganda ?? And how will you extract information from him in court when he can’t even talk. pic.twitter.com/DOW0Qor2iX

Prominent DJs in the country have resolved to play Bobi Wine music after every 15 minutes at the top of every hour in social protest until the jailed and tortured legislator/artiste is released. ~qataharraymond #NBSUpdates #NBSFocusOnArua pic.twitter.com/ChNoodndoP

Spoken to one of the people that have been allowed to see Bobi Wine at Makindye.The person says Bobi is in terrible shape due to the beatings,but wont be allowed to see a private doctor. As a citizen of Uganda I ask our leaders,who the hell do you think you're to do these things? 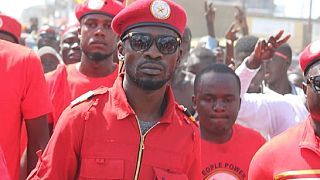 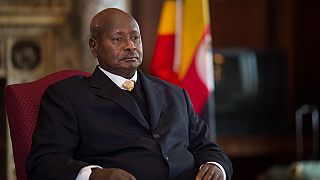 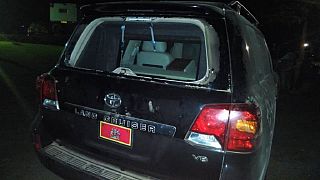