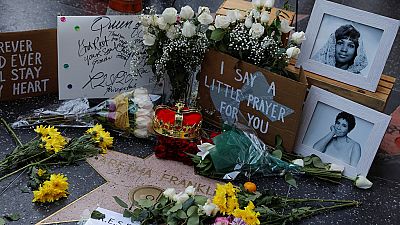 Franklin earned her title “the Queen of Soul” with a voice could be both powerful and plaintive.

Her music became part of the American soundtrack beginning in the 1960s through to her death on Thursday.

Hers wasn’t just music about freeways of love and being one of the chains of fools for a man or taking a bridge to get over troubled waters. Her music was the music that got black folks through.

“In her voice, we could feel our history, all of it and in every shade – our power and our pain, our darkness and our light, our quest for redemption and our hard-won respect,’‘ read part of the tribute from former U.S. president Barack Obama and his wife Michelle.

We look back at some of the iconic songs that cemented Franklin’s status as a timeless music icon.

“Hers wasn’t just music about freeways of love and being one of the chains of fools for a man or taking a bridge to get over troubled waters. Her music was the music that got black folks through,’‘ ESPN broadcaster Jemele Hill writing on theundefeated.com.

Aretha Franklin’s signature anthem is a commanding cover of Otis Redding’s 1965 rave-up that captured the spirit of the country on multiple levels – particularly the civil rights movement and the feminist movement.

It hit Number One on the Billboard Hot 100 in June 1967 and stayed there for two weeks and wound up leading the magazine’s Hot Rhythm & Blues chart for two months.

It earn Aretha her first of 18 Grammys

Written hardly a week after Franklin sang “Precious Lord” at the funeral of Martin Luther King, Jr. in Atlanta, Think which is credited to Franklin and her husband at the tiem, Ted White, is a woman’s demand that the man playing mind games with her take a look at himself.

Released in May, the single reached Number Seven on the pop charts, and topped the R&B chart, as it rode the political wave that followed the April assassination of King.

It is one of Franklin’s signature songs, and is considered the song that introduced her to the world.

It was Franklin’s first Number One hit on the R&B chart, hitting that mark on Franklin’s 25th birthday.

The Carole King and Gerry Goffin classic, which was released as the lead single to her 1968 album Lady Soul, depicts a woman in thrall to a man.

“She made millions feel like natural women, and she earned our everlasting Respect with each performance. May Aretha Franklin’s voice ring now throughout the heavens,” George Takei of Star Trek fame.

“I am a natural woman. I think that women have to be strong. If you don’t, some people will run right over you,” Aretha told Vogue in 2015, shortly after her tribute performance to Carole King at the Kennedy Center Honors left President Barack Obama in tears.

Arethra Franklin’s version of British slave trader John Newton’s 1779 hymn is the title pice of the best-selling album of both her own career and gospel music itself.

The lead single from Franklin’s 80s comeback with the Who’s Zoomin’ Who? Album, was written and produced by Narada Michael Walden.

“I had written ‘Freeway of Love’ for myself,” Walden told Billboard in 2003.

“But I flipped it and rewrote the lyrics for her. However, all those little [ad-libs] in that song, like ‘better than ever street,’ were things she worked up off the top of her head.”

Ther song reached Number Three on the Hot 100 and snagging her a Best Female R&B Vocal Performance Grammy for the 10th time.

Franklin covered everyone from the Supremes to Alicia Keys on her 2014 LP, but it was her take on Adele’s star-making hit “Rolling in the Deep” that became a Number One Dance hit and letting the world know that her reign wasn’t over.