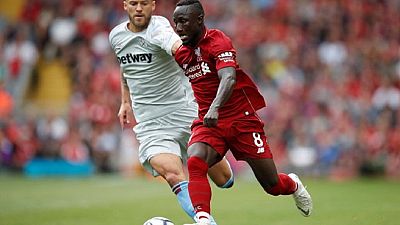 Guinea’s national football captain, Naby Keita announced himself on the English Premier League scene with a Man of the Match performance in Liverpool’s 4-0 win over West Ham on Sunday.

The 23 year old midfielder who was signed by Jurgen Klopp in July for up to $79m, was excellent on his debut for the English club side, dominating the midfield and playing a role in Mohamed Salah’s opening goal in the 19th minute.

His performance earned him plaudits from manager, Jurgen Klopp, fellow players, pundits and the fans.

I’m happy for him. He played very, very well. Everybody was happy about the job he did for us.

‘‘So Naby is in because he’s a really good footballer and I’ve said it from the beginning that he’s obviously settled really quick and has a similar style of play in a similar position as he did at Leipzig,’‘ said Klopp after the match.

“I knew he was an aggressive player but by taking the No 8 shirt which has been vacant since Steven Gerrard left Liverpool three years ago, Keita proved before a ball was even kicked that he does not shy away from a challenge,’‘ said former Liverpool midfielder-turned-pundit, Jamie Redknapp.

Liverpool fans have waited almost a year to see Keita in action after he was initially signed 12 months ago from RB Leipzig.

A premierleague debut and tonight's winner. ?

‘‘He is a ball winner with great drive and fantastic ability. I have seen him get out of some ridiculous situations in training where he had no right to do it,’‘ Milner on Naby Keita.

“I’m happy for him. He played very, very well. Everybody was happy about the job he did for us,’‘ said Sadio Mane.

Keita, who made his debut for the Guinea national team in July 2013, has played for European clubs RB Leipzig, Red Bull Salzburg and FC Istres before his Anfield move.

He is described as a box-to-box central midfielder, with ability to distribute the ball with range and accuracy, while also scoring goals frequently.

Keita has been compared to France’s N’Golo Kanté and Portugal legend Deco.