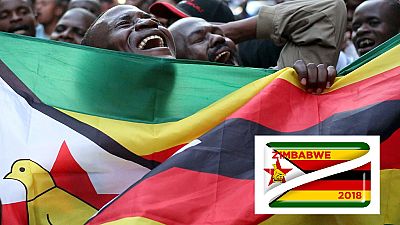 Forty-eight out of Zimbabwe’s two hundred and ten national assembly seats have so far declared with the ruling Zanu-PF leading with about 75% of seats.

The ruling party as at Tuesday midnight had garnered 36 seats with the Movement for Democratic Change Alliance (MDC Alliance) trailing with 11 seats. One seat was won by the National Patriotic Front (NPF) – a new party led by a former Zanu-PF member.

The development means that exactly 162 seats are yet to be officially declared by the electoral body. Even as the parliamentary results continue to trickle in, the main contention is about the presidential results.

MDC Alliance members have since Tuesday morning declared their candidate winner of the polls and have gone on to allege that the government was working tirelessly to rig the results.

Celebrations started outside the offices of the MDC Tsvangirai party as supporters seemed to believe that their candidate was set to become president.

As we wait for further official results, I urge us all to remember the teaching from Ephesians, “Be completely humble and gentle; be patient, bearing with one another in love.”

Meanwhile ZEC and the home affairs minister have cautioned against unofficial declaration of results. According to the electoral laws, anyone who declares uncertified results contravenes the law.

That person ‘shall be guilty of an offence and liable to a fine not exceeding level five or imprisonment for a period not exceeding six months or to both such fine and imprisonment.’ The minister warned that such acts were provoking the law with the risk of being sent to jail.

Another area the main opposition continues to harp on is the reported tampering of a vital results collation document, the V11 Forms. The state-run Herald explained the role of the form in the electoral process.

V11 Forms and V23 Forms are an important element of Zimbabwe’s electoral system, and a majority of voters need to know how important these documents are to the announcement of results. Below is a brief explanation of the forms:

The V11 form is an original document carrying results from a polling station and is signed by agents of all contesting parties. After the signing of the V11 form, information is then recorded on the V23 form, a collation of polling station results within a ward.

These forms show results of the Presidential, National Assembly and council elections, which are then forwarded to the National Command Centre where official results are announced.