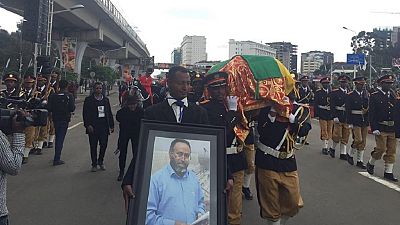 Ethiopia is holding a funeral ceremony for one of its greatest engineers, Simegnew Bekele. The man who was head of the nation’s flagship dam was found dead in his car.

State-affiliated Fana Broadcasting Corporate reported that the farewell ceremony for Bekele was held at the Meskel Square in Addis Ababa – incidentally the same location his lifeless body was found.

The Sunday morning event had a military guard participating before his remains were transported to the Holy Trinity Cathedral for final funeral rites. Hundreds gathered around to witness the solemn ceremony.

Reuters reports that federal policemen detailed to the ceremony were forced to fire tear gas to disperse protesters who were calling for justice in the murder of the engineer.

Photos showed people running away from smoke occasioned by the discharge of tear gas. A number of people were also injured as a result of the ensuing chaos.

A nation offers its profound respect to Enginner Simegnew, a true hero who graciously served his country until his death. #Ethiopia # Rest in peace ! pic.twitter.com/WcAiKLrQwO

In pictures: Funeral service to Simegnew Bekele (Eng.), the manager of the Grand Ethiopian Renaissance Dam, who was found dead in his vehicle at Meskel Square in Addis Ababa. pic.twitter.com/eVK1W8xd45

Today, a true patriot of #Ethiopia was laid to rest.

Our thoughts and prayers are with Engineer Simegnew Bekele’s family, friends and loved ones.

Crowds in Addis Ababa on Friday marched to the state television station’s headquarters chanting “No to killings” and “Justice for Simegnew”. Hundreds also packed the streets of his birthplace, Gondar.

Many people have averred that Simegnew Bekele had been murdered, though there was no immediate confirmation from the authorities, or details of any motive.

“We have confirmed that engineer Simegnew Bekele was shot dead … He had a bullet wound behind his right ear,” the head of Ethiopia’s Federal Police Commission, Zeinu Jemal, told reporters.

Zeinu said a Colt pistol was found in the vehicle in the city’s Meskel Square – a massive road junction and open space usually packed with vehicles and pedestrians during daylight hours.

A Reuters photographer saw blood stains along an arm rest inside his vehicle – a gold Toyota Land Cruiser – before an ambulance took away the body.

Ethiopia’s new Prime Minister Abiy Ahmed was “saddened and utterly shocked” by the death, his chief of staff said in tweet.

Simegnew was the public face of the Grand Renaissance Dam project on the River Nile – the centrepiece of Ethiopia’s bid to become Africa’s biggest power exporter.

Ethiopia has been pushing on with the project in the face of opposition from Egypt which fears it will affect the flow of the Nile, its main source of water. In June, the leaders of Ethiopia and Egypt vowed to iron out their differences peacefully.

The dam is currently only half complete, but the government says it is designed to churn out 6,000 megawatts (MW) of power on completion.