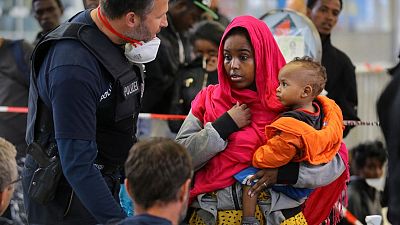 A pilot scheme meant to promote agriculture in Idanha-a-Nova, a small town in central Portugal, is including refugees who arrived in the country as part of a European Union (EU) relocation scheme.

Said and Bashir have been working at the centre for 9 months. They fled Eritrea, making the perilous journey across Africa in search of a better life.

Under the scheme, the pair are learning to grow crops like watermelon.

About 5,000 refugees flee Eritrea each month to escape poverty, political persecution and the prospect of potentially indefinite military conscription.

Many are destined for Europe, undeterred by increasingly restrictive immigration policies, with Eritreans forming the fifth largest group of irregular arrivals on European shores in 2016.

Many cross from Libya, the most dangerous route over the Mediterranean, exposed to violence, torture by smugglers, and the deadly risk of the sea itself.

“I am lucky. Most of our friends we are leaving them in the sea when they are coming from Libya to Italy, or from Egypt to Italy, they are sinking in the middle of the sea,” said Said.

Promising faster access to housing and employment in the agricultural sector, the Idanha municipality hopes the scheme will see rural areas develop and compete with cosmopolitan centres.

The government is focusing on ways to revive economies in rural areas with low populations, as youth continue to migrate in favour of urban life.

The European Union (EU) relocation scheme is designed to allow for the transfer of people in need of international protection from one EU member state to another.

“We are contracting refugees because we live in a productive region with a low population, so we need more people to help our region grow. It is an opportunity for us and for them, too,” said Pedro Guerra, manager at Hortas De Idanha, the company that promotes agricultural development in the municipality.

Out of six Eritreans living in the municipality, two have been granted refugee status to work.

Said will start a new job as liaison officer for the municipality, soon. He will work towards promoting ties between Idanha and its new arrivals.

“I can give them some advice from my experience; I have experience for more than one year and three months. It is difficult to live in Portugal, but if you take time, things are changing from day to day, or from time to time. You have to be patient to get your aim,” he said.

Since their 1998-2000 war, Eritrea has long used its enemy, Ethiopia to justify long-term military conscription, which caused hundreds of thousands of young men to flee, mostly to Europe.

It is hoped that many in exile will soon return home after both countries recently agreed to sweep away two decades of hostility.