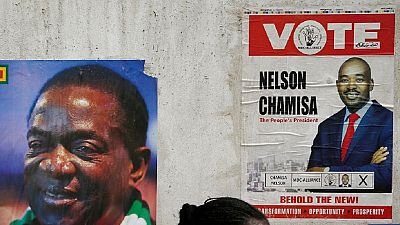 Chamisa who leads the Movement for Democratic Change (MDC) said the use of food in the Zanu-PF’s campaign was unacceptable.

Speaking to the press after meeting The Elders – a global think tank currently led by ex-United Nations Chief Kofi Annan – Chamisa said: “We are particularly concerned by the use of food as a political weapon by Zanu-PF. Particularly distributing food these two weeks in the round up to the elections.

“We say it is unacceptable, we would want the distribution of any government food after the elections so that at the moment we focus on proper campaigning without abusing food or undermining people on account of food and stomach politics.”

He also addressed what he said was President Mnangagwa’s complicity in wanting to manipulate the electoral process particularly the issue of ballot accountability.

Chamisa also stressed an opposition demand for the army to state unequivocally that it was not at any point going to get involved in the political process.

The July 30 vote is a general election, the first in the post-Mugabe era. Mugabe was deposed in a military takeover after over thirty years as president. Mnangagwa who is seeing out Mugabe’s term is running for his first of two constitutional terms.

It is the first time in decades that the international observer community is invited to witness the process.